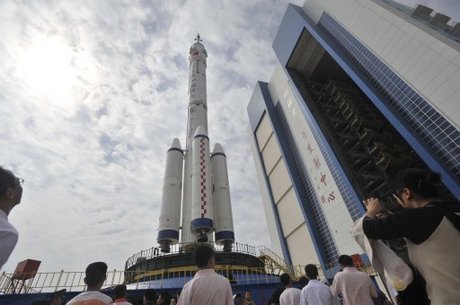 China said Tuesday it will launch its Tiangong-1 space module later this month, marking its first step towards building a Chinese space station.

The Asian giant sees its space program as a symbol of its global stature, growing technical expertise, and the Communist Party's success in turning around the fortunes of the formerly poverty-stricken nation.

It had originally planned to place the unmanned Tiangong-1, or "Heavenly Palace", in orbit last year, but was forced to delay the move for "technical reasons".

A spokesman for the Jiuquan Satellite Launch Centre in the northwestern province of Gansu, who refused to be named, told Agence France Presse the module will be launched sometime between September 27 and 30, just ahead of China's National Day on October 1.

According to the official Xinhua news agency, both Tiangong-1 and the Long March 2-F rocket that will take the module into space are already in place on a launch platform at the center.

Weighing eight tons, the module is due to stay in orbit around earth for two years.

In April, Yang Liwei, the first Chinese astronaut, told reporters China would attempt its first space docking between Tiangong-1 and another unmanned vehicle called Shenzhou 8 in the second half of the year.

If this succeeds, the module will then dock with two other rockets -- Shenzhou 9 and 10 -- in 2012, both of which will have astronauts on board.

Before 2016, China will launch a space laboratory and, Yang said, "Around 2020, we plan to realize the construction of a space station in orbit for long-term stays in space".

China's space station will be made up of the module, two laboratories, a cargo ship and a manned rocket, with a total weight of 60 tons, compared to 137 tons for the Russian station Mir and 419 tons for the International Space Station (ISS), state media has said.

China became the world's third nation to put a man in space independently -- after the United States and Russia -- when Yang piloted the one-man Shenzhou-5 space mission in 2003.

In September 2008, the Shenzhou-7, piloted by three astronauts, carried out China's first spacewalk.