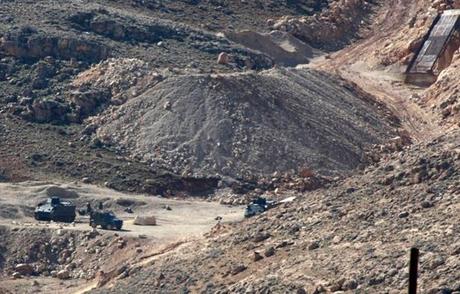 The Syrian army targeted on Wednesday armed men sites in the outskirts of Arsal with artillery shells, in an advanced field move after the Syrian troops have been using warplanes to bomb.

The National News Agency said: “The Syrian army targeted sites of the gunmen and their movements in the outskirts of Arsal, al-Zimrani and al-Shahot Valleys, al-Rahwat area and the outskirts of al-Ajram.”

"The targeting happened with "rockets and artillery shells from inside Syria,” added NNA.

The Syrian Army bombed “areas in Ajram valley and al-Mir crossing point in al-Qalamoun” which is along the Lebanese border, said the Syrian Observatory for Human Rights.

The jihadist gunmen are still based in the outskirts of Arsal after they escaped there in May after the clashes in al-Qalamoun.

These gunmen also stormed Arsal in August, and killed 20 soldiers and six civilians before they abducted 35 servicemen and escaped into the outskirts of Arsal. After that they freed only seven of the servicemen.

The Lebanese army, Hizbullah, the Syrian Army and even the Popular Front for the Liberation of Palestine - General Command are protecting the Lebanese Syrian border.

@Terrorist, personally I would toe a different line: anything and anyone who shells the Terrorists in Arsal can only be a good thing, there are times when the enemy of my enemy is my friend. Even though I have a serious hatred for the Syrian Regime, on this occasion I wish it luck because the worse of the two evils if ISIL and Al Nusra. Yalla ya Bashar send them more shells, wou iza fik kamen kam barmil.