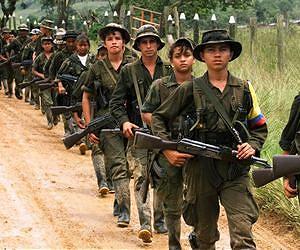 FARC rebels kidnapped two Colombian soldiers after clashes between the Marxist guerrillas and the military in the far east of the country, the army said Thursday.

The capture, which comes amid a slow-moving peace process between the rebels and the government, took place in Arauca Department, bordering Venezuela, the National Army of Colombia said in a statement.

The double abduction Sunday came after a military operation in a rural area during which a soldier was killed and two wounded.

The army accused the guerrillas of "a flagrant violation of the commitment not to kidnap Colombians" and demanded their release.

The military had taken "all necessary actions to secure the release of the two soldiers."

Founded in 1964, FARC today has about 8,000 fighters and is the largest of the guerrilla groups waging Latin America's longest-running armed conflict.

FARC is currently locked in dialogue with Colombian government negotiators attempting to broker a peace deal to end the five-decade-long conflict.