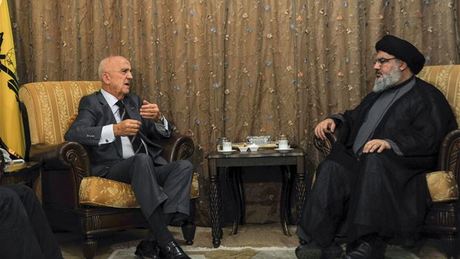 Nasrallah met Moqbel in the presence of Wafiq Safa, head of the party's Liaison and Coordination Unit, according to a Hizbullah statement.

The statement said the two men discussed “the political and security developments in Lebanon and the region.”

Moqbel visited Iran in October to discuss a military grant that Tehran had offered to Lebanon.

The minister said at the time that Iran “agreed to provide a large number of the Lebanese army's demands” while acknowledging that “this grant is an unconditional grant.”

But Moqbel stressed that the proposed donation needs the approval of the council of ministers before the “necessary measures” can be taken.

Iran had vowed to supply the Lebanese army with much-needed equipment following its deadly clashes with fighters from the Islamic State group and al-Qaida affiliate, al-Nusra Front, on the Syrian border in August.

Also Tuesday, Nasrallah made a rare trip to visit to a top Shiite cleric visiting Lebanon for medical checkups.

The Hizbullah media office said that Nasrallah visited Grand Ayatollah Bashir al-Najafi and discussed "Muslim affairs with him." It did not elaborate or say where the meeting took place.

Al-Najafi arrived in Beirut last week where he was supposed to undergo medical tests.

Lol it's so funny how Iran is banned from supplying/selling weapons to other countries, yet they're still talking about this stupid grant.

and they pretend to be "patriots" LOL

he isn't preventing anything, he is just pouring oil on the fire, later you will thank him for that....