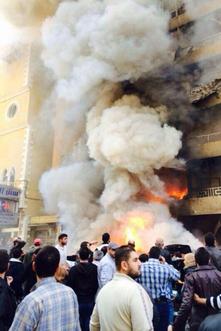 The spokesman of the Qaida-linked Abdullah Azzam Brigades, Sheikh Sirajeddin Zureikat, vowed to demolish the security zones of Hizbullah in Beirut and nearby areas.

“We will target Hizbullah's security premises on the Lebanese coast, in the Ouzai and nearby areas,” Zureikat said in an online recording on the memorial of the one-year bombing that targeted the Iranian Embassy in the southern suburbs of Beirut, a stronghold of Hizbullah.

Zureikat said that the “the assault against the embassy wasn't the first and the Iranian Cultural Center wasn't the last.”

Zureikat stressed in his message that Hizbullah's interest in Lebanon will be targeted “in retaliation for the party's acts in Syria.”

The suicide attack against the Iranian Embassy in 2013 and the Iranian Cultural Center in 2014 killed scores of people and wounded dozens.

The Abdullah Azzam Brigades claimed responsibility for the double bombing, vowing additional attacks in retaliation to Hizbullah's involvement in the Syria war.

Hizbullah has dispatched fighters to battle alongside the Syrian regime against rebels seeking the overthrow of President Assad.

they will for sure.

they tried, they succeeded, and they will succeed.

I hope they fail miserably. Only the innocent suffer.

this is the exact attitude i have a problem with: you truly are inviting trouble on all of us.

(1). Mystic, as Lebanese people, as a small nation, no amount of bravado will or can save us from the terrible onslaught of a demented and completely insane group of terrorists. Call them what you may, but trust me, only our UNITY as a people can and will save us from disaster. It is fully imperative that we look at our situation as ONE people and definitely NOT as Hezbollah, LF, FPM hence and so forth. As Lebanese, we've too often repeated this sullen mistake, a mistake of refusing to look above and beyond our myopia, Lebanon can have a 1000 militias and all armed to the teeth, yet that will only cause more chaos and bring about the total collapse of a nation that deserves a lot better. I will use your phrase "Let them try", yes, let them try, but now that our army has proven its mettle well beyond all doubts, yes, let them try. For all I know, Hezbollah is now seeing its strength on the wane.

(2). Mystic. Israel? yes, on a low scale warfare, Hezbollah stood some chance, call it hit and run guerrilla tactics, but other than that, forget it. Daesh or ISIS is a totally different matter, they are ruthless, they have no half solutions, they are brain dead thus we cannot discount them at any time but take them dead serious. They are many, well financed and well armed, thus we will survive them only if we take our unity seriously and well above the theoretical level. It's no longer about Hezbollah against Sunni Jihadi extremism, it's about a Tsunami that calls for our wisdom and for us to take the high ground and do battle from there. Let's all of us give our 101% very best to our ARMY, to the state, to the nation, to the Lebanese people, let us survive as wise people do, and let's live altogether in unity, prosperity, hope, joy, good health and happiness.

unfortunately they have already tried. While I firmly condemn any act of violence in general and specifically indiscriminate acts of violence or terrorism, the intervention of Hizbollah in Syria has given to those terrorist groups a valid reason to attack hiizbollah target.

@Sheikh Sirajeddin Zureikat you cowardly low-life thug, go face your enemy on the battle field and leave Lebanon and its citizen live in peace. Murdering innocent Lebanese and being proud of it is a tell-tale sign of a psychologically imbalanced degenerate.

One evil act does not justify another. May all terrorists rot in hell in a foreign land far far away from Lebanon.

I agree with your comment Bandoul: nothing justifies terrorism.
my comment is to highlight what caused this only. there would not be reason for retaliation if hizbushaitan did not go to Syria on a killing spree.

Thank you for the civilized response geha. God bless :)

bless anyone person, entity, organization, brigade or country that inflicts pain, suffering, death and destruction upon the iranian sectarian terrorist militia and its supporters wherever they maybe.

Didn't the hezballah sponsored false flag free sunni of baalbek brigade claim responsibility for some of the suicide attacks on hezballah and the army, the army should interrogate hassan nasrallah about these attacks and his involvement in them. Creating sectarian strife is not a nice thing ya hassan.

The Free Sunnis of Baalbek Brigade which has been claiming responsibility for various bombing in Lebanon has pledged allegiance to the Islamic State of Iraq and al-Sham( ISIS ) chief Abu Bakr al-Baghdadi, describing him as “the caliph of the Muslims.”

Zureikat sounds like Israeli policies. They certainly benefit Israel, but to say that is a "Conspiracy", and I'm mad. In the end, it is what it is.

I remember the days when that area used to just be orange and olive trees. Now? It's become nothing more than a foreign run area AND is now being attacked by more foreigners, who hate these foreigners.