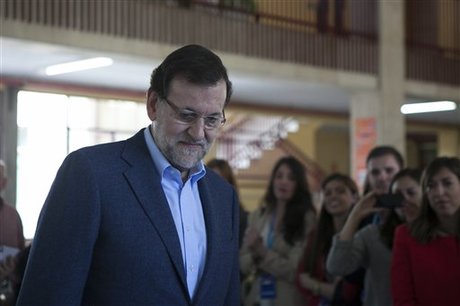 Prime Minister Mariano Rajoy on Wednesday called plans by the Catalan government to hold early elections as part of a push to gain independence from Spain "a step to nowhere".

Catalan president Artur Mas announced Tuesday that he wants to hold early elections in the wealthy northeastern region centered on independence which would involve a joint list of candidates from all parties that favor secession.

The election is the "only" way to allow Catalans to voice their opinion on the issue after a symbolic independence referendum held on November 9 that was opposed by the central government, he added.

If the joint list wins an absolute majority, the regional government that emerges would then open talks on the terms of separation and Catalonia's independence would be put to an official referendum in a process that would last 18 months.

"Mr. Mas has given a step to nowhere. He has become the president of a part of Catalans which is a minority, and has abandoned the large majority," Rajoy told journalists in parliament.

The Catalan government says 2.3 million people took part in the symbolic independence referendum organised by volunteers on November 9 -- about a third of all eligible voters in the region.

Roughly 80 percent of those who took part in the ballot said they wanted Catalonia to be an independent state. However the majority of anti-independence voters stayed at home.

Catalonia held the poll after plans to stage an official non-binding referendum were suspended when the Spanish government challenged its legality.

Mas has hailed the ballot as a "total success". But Spain's conservative Prime Minister Rajoy dismissed it as a "deep failure" since "two out of three Catalans paid no attention".

Rajoy argues that holding an official referendum would be "impossible" because under Spain's constitution only the central government can call such votes.

Demands for independence in Catalonia, which accounts for about a fifth of Spain's population and economic output, have grown over recent years, fanned by the country's economic crisis.

Catalans complain that their region does not receive investments in proportion to the taxes it pays and that the central government meddles in its linguistic and education policy.