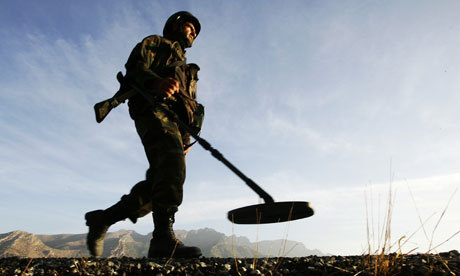 Global efforts to eradicate landmines are bearing fruit, campaigners said Wednesday, noting that the number of victims injured by the deadly weapons have fallen to the lowest level in 14 years.

Nobel winners, the International Campaign to Ban Landmines, said in its annual report that last year just 3,308 people were injured or killed by landmines or unexploded ordnance left over from different conflicts -- 25 percent fewer than in 2012.

But it voiced concern about the situation in Ukraine, saying it remained unclear whether landmines have been laid in the bloody conflict between Kiev and pro-Russian rebels.

In 2013 there was an average of nine victims a day, compared to 25 daily when the Landmine Monitor first started recording casualty rates in 1999. The vast majority, some 79 percent, were civilians.

In another measure of success in the fight against the scourge, nearly all use and production of the deadly weapons has ceased around the world.

"While far too many people are still losing their lives and limbs to landmines, new casualties are at their lowest level ever recorded — possibly the best measure of how successful the Mine Ban Treaty has been," said Megan Burke, casualties and victim assistance editor of Landmine Monitor.

"But we can’t forget that there are hundreds of thousands of landmine survivors waiting for their needs to be met and their rights to be fulfilled."

While none of the 162 signatories to the Mine Ban Treaty had broken their pledge not to use landmines last year, there are lingering concerns about the crisis in Ukraine.

"Stocks of anti-personnel mines are present in the ongoing conflict in Ukraine between government forces and Russian-backed separatists," the Landmine Monitor noted.

But it stressed "it is not yet possible to determine whether antipersonnel mines have been used. Ukraine is a state party to the treaty."

"Any use in Ukraine must be halted and fully investigated," insisted Mark Hiznay, senior researcher at Human Rights Watch.

Campaigners also called on Yemen to do more to hold accountable those who laid anti-personnel mines in the Gulf country in 2011 -- the only time a state signatory to the ban has violated the treaty.

Only 35 countries have not signed up to the international treaty, but most are abiding by its key provisions, although India, Myanmar, Pakistan and South Korea are still believed to be manufacturing the weapons.

But the campaign hailed as "a victory for global recognition of the treaty" this year's pledge by the United States to step up the destruction of its stockpile of some three million mines and to ban US use of anti-personnel mines except on the Korean peninsula.

More than 48 million stockpiled landmines have been destroyed since 1999, and only six signatory countries have failed to complete the destruction of their stocks.

Ukraine, along with Greece and Belarus, remain in violation of the treaty as they have not got rid of such weapons within four years of signing the pact.

However, in a negative side-effect of the campaign's success, global funding for mine clearance activities is shrinking even as campaigners strive to meet the goal of a mine-free world by 2025.