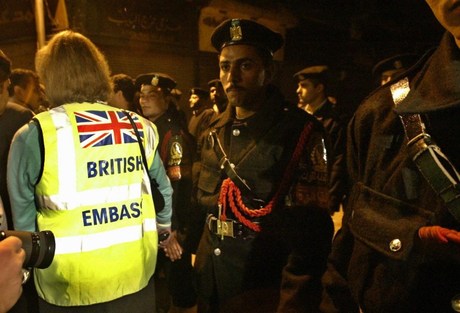 The British embassy in Cairo suspended public services on Sunday for security reasons, a spokesman for the mission said.

Embassy spokesman David Kinna declined to give details but said the decision was taken in the best interest of the embassy and its staff.

"We have suspended the public services at the embassy for security reasons," he told Agence France-Presse, adding that the mission was trying to resume work as quickly as possible.

"Please do not come to the embassy building," the mission said in a separate statement, adding that its consulate office was functioning in the Mediterranean city of Alexandria.

Egypt's foreign ministry said the halt in public services at the British embassy was "a preventive security procedure" but also provided no further details.

They say their attacks are in retaliation for a government crackdown targeting Morsi supporters which has left hundreds dead and thousands imprisoned.

Most attacks have been in the restive Sinai Peninsula, but several deadly blasts have also been set off in Cairo and other cities.

London's wider advice for Egypt urges Britons not to travel to North Sinai, parts of South Sinai, and to areas bordering Libya.

"There is considered to be a heightened threat of terrorist attacks globally against UK interests and British nationals from groups or individuals motivated by the conflict in Iraq and Syria," the Foreign and Commonwealth Office said in a recent update on its website.

It identified Sinai-based Ansar Beit al-Maqdis, which pledged allegiance to the Islamic State group in November, as the most "active terrorist group" in Egypt.

No foreign missions nor interests have been directly targeted by militants in Egypt since Morsi's ouster, but embassies have stepped up security measures.

IS, which has captured swathes of territory in Iraq and Syria, has called on affiliate groups to target foreign nationals and interests in their countries, especially citizens of countries belonging to a U.S.-led coalition fighting IS.