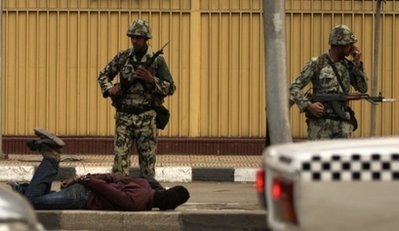 Since ex-army chief and now President Abdel Fattah al-Sisi deposed Morsi in July 2013, his followers have been the target of a relentless crackdown by the authorities, who are also accused of exploiting the judiciary in their fight against the Islamist opposition.

In the first case referred to military tribunals, 139 Morsi backers are set for trial over the deaths of three policemen in the southern province of Minya, an official from the attorney general's office said.

In the second, 299 Morsi supporters will be tried for the deaths of five civilians in clashes between Islamist protesters and security forces and the burning of Beheira provincial government headquarters at Damanhur, north of Cairo.

The violence took place on August 14, 2013, a day when more than 700 people were killed in clashes when security forces swooped on two pro-Morsi Cairo sit-ins in the capital.

In October this year, Sisi issued a decree allowing military trials for civilians suspected of attacking state infrastructure, after a string of deadly strikes on soldiers.

Since the 2011 uprising that forced the departure of Morsi's predecessor Hosni Mubarak, military courts have tried thousands of civilians in a move denounced by human rights groups.

More than 1,400 people have been killed in the crackdown that followed Morsi's removal, while more than 15,000 have been jailed and hundreds sentenced to death after perfunctory mass trials.