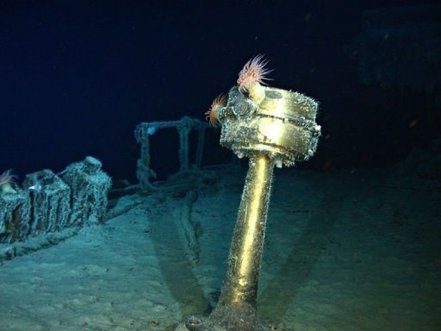 When the SS Gairsoppa was torpedoed by a German U-boat 70 years ago, it took its huge silver cargo to a watery grave. U.S. divers are working to recover what may be the biggest shipwreck haul ever, valued at some $210 million.

Florida-based Odyssey Marine Exploration on Monday confirmed the identity and location of the Gairsoppa, and cited official documents indicating the British ship was carrying some 219 tons of silver when it sank in 1941 in the North Atlantic some 300 miles (490 kilometers) off the Irish coast.

Valued then at 600,000 pounds, the silver today is worth about $210 million, which would make it history's largest recovery of precious metals lost at sea, Odyssey said.

"We've accomplished the first phase of this project -- the location and identification of the target shipwreck -- and now we're hard at work planning for the recovery phase," Odyssey senior project manager Andrew Craig said in a statement.

"Given the orientation and condition of the shipwreck, we are extremely confident that our planned salvage operation will be well suited for the recovery of this silver cargo."

Recovery is expected to begin next spring.

After a competitive tender process the British government awarded Odyssey an exclusive salvage contract for the cargo, and under the agreement Odyssey will retain 80 percent of the silver bullion salvaged from the wreck.

The 412-foot (125-meter) Gairsoppa had been sailing from India back to Britain in February 1941 bearing a cargo of silver, pig iron and tea, and was in a convoy of ships when a storm hit. Running low on fuel, the Gairsoppa broke off from the convoy and set a course for Galway, Ireland.

It never made it, succumbing to a German torpedo in the contested waters of the North Atlantic. Of the 85 people on board, only one survived.

The Gairsoppa came to rest nearly 15,400 feet (4,700 meters) below the surface, where for decades it was lost to the world. A previous effort to locate the shipwreck failed.

Odyssey found it relatively quickly, and insists the depth of the site won't prevent a full cargo recovery.

"We were fortunate to find the shipwreck sitting upright, with the holds open and easily accessible," Odyssey chief executive Greg Stemm said.

"This should enable us to unload cargo through the hatches as would happen with a floating ship alongside a cargo terminal."

Odyssey is a world leader in deep-ocean exploration and has numerous shipwreck hunting projects in process around the globe.

In May 2007, it announced it had found half a million silver coins and hundreds of gold objects from a ship they code-named the "Black Swan," which went down in 1804 in the Atlantic off the Strait of Gibraltar. The find is being contested by Spain, which claims the trove.

In the latest operation, the firm recently conducted remotely operated vehicles from its main ship, the Odyssey Explorer, to inspect the Gairsoppa wreck. It acquired still and video imagery from the site which were used to confirm the identity and evaluate the condition of the ship.

Photographs released by the company show clear details of the Gairsoppa, including a ladder leading to the forecastle deck, a waist-high compass used by the helmsman, even the hole in the steel hull blown open by the torpedo.

The find highlights the influential role that modern technology has come to play in the business of finding shipwrecks, with vastly improved sonar equipment, global positioning systems and advanced deepwater robots that scour the world's oceans for booty.

UNESCO estimates there are some three million shipwrecks worldwide, with billions of dollars in sunken treasures and priceless knowledge that can be recovered from the depths of the ocean, including vast amounts of naturally occurring copper, silver, gold and zinc deposits waiting to be discovered

"The majority of the world's ocean floor has not yet been explored," said Odyssey president Mark Gordon, who told Agence France Presse that the discovery at some 4,700 meters (15,400 feet) beneath below the ocean's surface is a treasure trove for companies like his.

"We know more about the surface of the moon than we know about the deepest parts of the oceans. It's exciting to be working at depths like these and to be among the pioneers of deep ocean exploration in this unexplored frontier."