Geagea, Hariri Commemorate 'Man of Dialogue' Shatah on First Anniversary of his Assassination 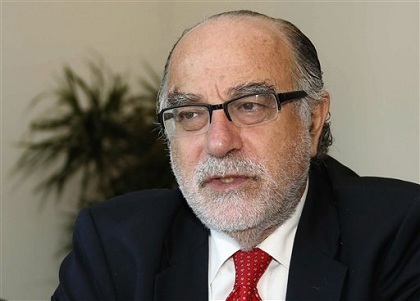 Lebanese Forces leader Samir Geagea and head of the Mustaqbal Movement MP Saad Hariri hailed on Saturday former Minister Mohammed Shatah on the first anniversary of his assassination as a figure of moderation and dialogue.

Geagea said during a press conference on the occasion: “We miss your wisdom, nationalism, and moderation during a time when we are most in need of them.”

“It is true that you were taken away from us before your time, but you will remain a symbol of nationalism, moderation, and openness,” he stressed.

“You are an example to those seeking justice and freedom,” he declared.

“The anniversary of your assassination will not be a passing memory,” stressed Geagea.

“The pain of the memory is exacerbated by the poor conditions we are living through today,” he remarked

“We will not despair however and we will not rest until all the goals that Shatah and the martyrs of the Cedar Revolution are achieved,” vowed the LF leader.

For his part, Hariri said in a statement that the criminals behind Shatah's murder “struck a target that cannot be replaced.”

“His death was a painful blow to me personally and created a great void in our national and political path,” he noted.

“Several of us did not believe that such a dialogue-minded figure would be the target of a criminal blast,” he added.

“In his loss, we miss a vital symbol of dialogue and perseverance against despair,” stressed the former premier.

Shatah was killed in a bombing in downtown Beirut on December 27, 2013.

Hariri had accused in the wake of the blast the criminals as being the same ones who assassinated his father, former PM Rafik Hariri, on February 14, 2005.

The Special Tribunal for Lebanon tackling the 2005 murder has accused five Hizbullah members of being behind the crime.

dear army intelligence: any news about the (yellow) color of the KIA that came out of dahyeh and used by the terrorist party to assassinate Minister Shatah in broad daylight. Kindly, update us

Another noble act by the resistance

Every time an anti assad is assisinated by Ba'ath or HA, we are accustomed of the dance of Israel created strife and killing them,

well said defacto. It was al manar who said it and it was denied by the army and the justice minister.

it was a newspaper report and was discredited by army intelligence. Do some research and you will find answers!

Nope defacto asafir said that you cant tell the difference, learn what defacto means before using the term. That was just another one of the leaks and reports used by the Iranian mercenary terrorist brigades their friends and medias to fool the followers into believing in the self claimed divinity, not a hard task obviously. I mean after Walid Mou3alem's laughable video evidence, Wi2am Wahhab's counterfeit documents, Michel Samaha's Syrian regime's "alQaeda" bombs, the Free Sunni of Baalbek brigade any even casual observer no matter how trusting becomes cynical. But not M8 full time shift workers, they will swallow the bait, the hook and the sinker every single time. Bon Appétit!

Lmaooooooooo that report was so false that everyone ignored it, no one commented on it, not even Hezbollah. And please explain why Azzam Brigades would kill Shatah??? What, to incite strife??? Lol so pathetic.

Keep your last sentence because I will continue to blame Hezbollah for it. Hezbollah had motive, no one else did. Shatah was really close to Hariri (as well as Wissam al-Hassan) and his assassination was basically a message to Hariri that anyone close to him can be touched and he himself will find no safe haven in Lebanon.

@Nick
absolutely true. That was his last tweet. This tweet was right then, and is an evidence today.
Ebola is becoming the "state in the place of the state" and the caporal acting as a servile servant.

@defacto, Are you naturally like that, or do you train every morning?

Ebola wants to enforce a new Pact. A Mutalateh. To this end, it needs to destroy the existing system: constitution and institutions thus creating void. To make it even worse and block the country without presidency they have a simple and easy tactic : name the caporal as their candidate. They know very well how to use his mental deficiencies. The Caporal will play his "role" and while doing it will serve his masters who are pulling the cords.