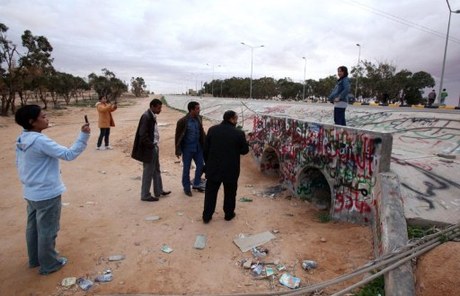 Islamist militants have abducted 20 Egyptian Christians in Libya in recent days, a source close to the government said Saturday.

The Ansar al-Sharia militia had kidnapped 13 of them Saturday in the coastal city of Sirte and the rest of them there over the past few days, the source said.

Their identity was not immediately clear, except that they were said to be Coptic Christians.

Thousands of Egyptians work in Libya, mainly in the construction and craft sectors, and several have been killed in recent years.

In February, the bodies of seven Egyptian Christians who had been shot were found near the second city of Benghazi.

And just last week, an Egyptian Coptic couple were found dead in their home in Sirte, hometown of longtime dictator Moamer Kadhafi, who was overthrown and killed in a popular uprising three years ago.

Their 13-year-old daughter, who was kidnapped, was later found dead.

Local council chairman Yussef Tebeiqa said the attack might have been motivated by religion as money and jewellery were not taken.

Sirte, 500 kilometers (310 miles) east of Tripoli, is in the hands of Islamist militias, including Ansar al-Sharia, which the UN Security Council last month added to its terror list over links to al-Qaida and for running Islamic State group training camps.

Since Kadhafi's ouster, Libya's small Christian minority has expressed fears over Islamic extremism, especially with the rise of armed militias enforcing their own law in the absence of central control.

The country remains awash with weapons and powerful militias, and has rival governments and parliaments.

As well as Sirte, Tripoli and second city Benghazi are largely in the hands of militias, and the internationally recognized government has taken refuge in the remote east.

Separately Saturday,  Islamist fighters attacked and killed 15 soldiers in the town of Soknah, 180 kilometers (110 miles) southeast of Tripoli, a source close to the government said.

Some of the troops were shot dead and others decapitated by militants who have pledged allegiance to IS, the source added.

UN-brokered talks aimed at ending months of violence and political deadlock in the North African nation are scheduled to begin on Monday.

A UN diplomat said the initiative calls for a ceasefire as well as a withdrawal of all militias and the disarmament of the warring sides.

Libya's internationally recognized parliament has voted not to attend the negotiations if the rival legislature in Tripoli is party to the talks.

Last month, leaders in the sub-Saharan Sahel region of Africa meeting in Mauritania called on the United Nations to organize an international force "to neutralize the armed groups" in Libya.

Libya's violence has drawn strong condemnation from both the UN and European Union, and rights group Amnesty international has accused several factions of war crimes.