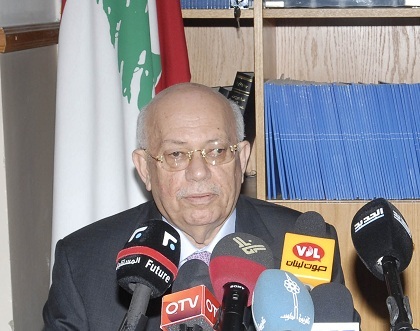 Social Affairs Minister Rashid Derbas has said new regulations to impose visa restrictions on Syrians are aimed at differentiating between refugees and visitors.

The authorities are compelled to “organize the entry and exit of Syrians as part of the implementation of the new security strategy,” Derbas told pan-Arab daily Asharq al-Awsat in remarks published on Sunday.

The minister said the state has not blocked any border crossing or expelled any Syrian refugee.

The government is ready to coordinate with the Syrian authorities about the return of refugees to their country's safer areas, he said.

But such a request has not yet received a positive response from Damascus, Derbas added.

Ali said Damascus understands the new measures but that "the issue of Syrians entering and leaving needs coordination and integration between the concerned parties in the two countries.”

On Sunday, Ali told al-Mayadeen television that Damascus was not "notified in advance" of Lebanon's decision.

"The measure is not appropriate," he lamented.

The new visa regulations, which lay out various categories, including for tourism and medical treatment, come into effect on Monday.

This is the first time that Lebanon has required Syrians to apply for visas. Citizens of both countries have been able to travel freely across their shared border since Lebanon gained independence in 1943.

For Lebanon, the flood of refugees escaping the civil war in their country, has placed a tremendous strain on the country's economy, resources, infrastructure and delicate sectarian balance.

There are around 1.5 million displaced Syrians in the country of about 4.5 million.

Lebanon began imposing tighter restrictions in October when the government announced that it will not accept any more Syrian refugees except for what it deemed to be "exceptional" cases.

Since then, the number of refugee registrations in Lebanon has considerably dropped.

Hope it's not too late. With 1.5 Million Syrian Refugees, "some of them" are bound to create trouble. It's like we've learned nothing from our History with Palestinians.

I agree many must absolutely need to be deported but our government is finally finding their voice to do something about it. This measure comes a little late, but a necessity.

Mr Derbas, you're talking as if you did not realize the fact that pretty most of the Syrians inside Lebanon are no longer refugees but blatant opportunists. The time has now dawned when we Lebanese must make them return back home.

bro I agree on this one too bro. But:
12 minutes ago Syrian Ambassador to Lebanon Ali to al-Mayadeen: We were not notified in advance of Lebanon's decision to impose visas on Syrians and the measure is not appropriate.

So what do bro?

this is a assad / hezbollah thing, tho the ambassador is denying it.