Racism, War -- and Laughs for Arab-Americans 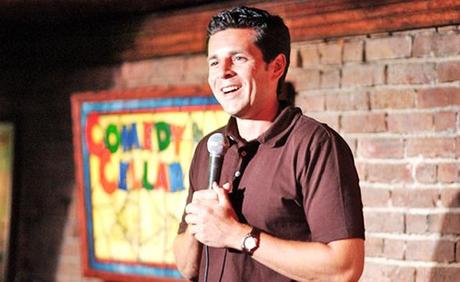 Osama bin Laden, racial profiling, airport security, the Palestinian-Israeli conflict -- and that was just the opening for Arab-American comedians at a New York festival.

No topic was too edgy at the New York Arab-American Comedy Festival in a packed Manhattan club on Wednesday. And for a group often marginalized, if not mistrusted, since the September 11 attacks, it was a chance to unwind.

"People tell me, 'We killed Osama, what do you think, bro?' I say I don't care. Tell me when someone kills my landlord," Sam, a Lebanese-American comedian said.

As the laughter died down, he declared, deadpan, that he didn't think the Al-Qaeda leader had really been killed.

"Because he doesn't exist." The room in the Gotham Comedy Club fell silent.

"The Republicans made up that dude a long time ago. That's why they're so upset now, because they know Obama didn't kill him, but they can't say!" he said to hoots of laughter.

More than 250 people cheered and applauded wildly as one comedian after another skewered American politics, Muslim family values, Jews, women, blacks and even midgets.

The audience was mixed, with a majority of Arab-Americans, a few of them in headscarves, but most dressed like any other hip young Americans.

Performers -- veterans of shows with names like "Arabs Gone Wild," "We Ain't Terrorists," "Saudis in Audis," and an upcoming documentary "The Muslims Are Coming!" -- mined classic comedy material like family life and dating.

But jokes had the extra edge of coming from a minority group that is one of the most scrutinized and least understood in the United States.

Dean Obeidallah poked fun at the new airport full body scanners, saying that as he stood in the machine, he thought: "They're looking at my junk and I'm just thinking, people, please don't laugh."

Along the same lines, Omar Elba recounted how his ultra-conservative mother approached a security guard "covered head to toe" and insisted: "I'm under here. You just need to trust me."

For many comedians, there was rich material to be explored in other Americans' ignorance of Arab culture and Middle Eastern realities.

Taking the microphone, Mike Easmeil said: "My actual name is not Mike. It's Mahmud.... I lived in Mississippi for a while." Laughter immediately erupted from a room full of people long familiar with casual racism.

"Trying to tell them how to say Mahmud, God that was awful," he said. "They'd say Mac what? My brother is Hussein, that was fine. They'd say Jose? Oh it's one of those Mexicans, it's all right!"

Aron Kader, the evening's master of ceremonies, asked: "How many more wars do we have to get into over there before people stop talking to me in Spanish?"

Tracy Francis, who has helped organize the festival for six years, said she was encouraged by the shift in the make-up of the audience, which in the early days had been almost entirely Arab but now has a large minority of whites.

"Part of it is that the comedy festival is getting well known and people are interested in it. It's Arabs being funny and they're like: 'What? They're not funny.' A lot of people have a view of us as a very conservative culture."

Comedy, Francis said, is overcoming barriers. "This is the best way to fight this."