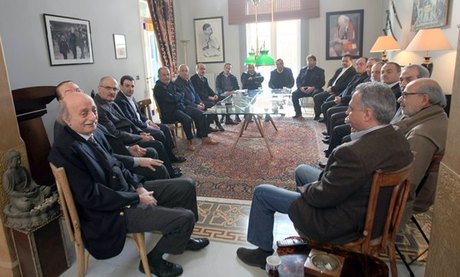 A meeting held at MP Walid Jumblat's residence in Clemenceau failed Wednesday to convince activists to call off planned protests aimed at securing the closure of the controversial Naameh landfill on January 17, as organizers called on Environment Minister Mohammed al-Mashnouq to step down.

During a rally for the Campaign for the Closure of the Naameh Landfill, a spokesman called on al-Mashnouq to “resign immediately after his failure to find an alternative solution for the landfill,” urging “a popular rally at the landfill's entrance on January 17.”

He also called on the government to “declare an environmental state of emergency, form a working group, and endorsing a permanent solution for the problem of solid waste that is based on waste segregation at the source.”

Earlier on Wednesday, al-Mashnouq said that he agreed with several officials, including PSP leader Jumblat, that the planned protest against the Naameh landfill would be adjourned.

“We agreed to adjourn any plan for a protest about the Naameh landfill,” which lies in the Shouf district south of Beirut, al-Mashnouq told reporters following the meeting at Jumblat's residence.

In addition to al-Mashnouq and Jumblat, the meeting was attended by Ministers Wael Abou Faour, Ali Hassan Khalil and Akram Shehayyeb, MP Talal Arslan and the head of the Council for Development and Reconstruction, Nabil al-Jisr.

“The plan that was approved by the cabinet abides by high environmental standards,” al-Mashnouq said.

“We expressed commitment to the deadlines set by the plan … which gives Lebanon and PM Tammam Salam a true opportunity to resolve the waste crisis,” he said.

“We also agreed to adjourn any plan for a move against the Naameh landfill,” the minister added.

However, when asked whether he had guarantees that the protests will be called off, Mashnouq said: “There is no guarantee.”

The head of the municipality of Naameh had said on Tuesday that the residents of the town were planning to hold a demonstration near the landfill whose closure was extended by the government.

Cabinet members approved the plan to extend the closing of the landfill for three months and for another three months if the waste treatment project was not implemented by then.

The deadline for the end of the dump's operations expires on Saturday. Jumblat had previously said that the road to Naameh would be closed as a protest.

The government also agreed to extend for the same period two other contracts that also expire on Saturday.

One contract is with Sukleen, which is responsible for collecting and transporting the garbage in Beirut and Mount Lebanon. The other is with Sukomi company that treats the waste transferred to the Burj Hammoud dump by Sukleen and takes them to Naameh.

The new plan, which decentralizes the management of solid waste, divides Lebanon into six blocks and limits the licensing of garbage collection to one contractor in maximum two blocks.

The government also agreed that contractors who win tenders would find the locations of landfills. If they fail to do so within a month, then the environment ministry and the CDR would secure them on condition that the contractors bear the cost.

“We hope the areas where the landfills will be created would be environmentally friendly,” said al-Mashnouq.

“There will be transparency in issuing the tenders,” he added.

Jumblat made a brief statement after him, saying: “We are facing a test” on the environment file.

Funny thing is one of the people in the photo is driving and promoting the protest on Saturday...

No, better drown in your own trash. Talk is ceap act ... clean your mess.