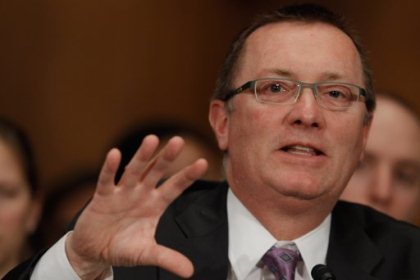 A rocket attack on the Ukrainian city of Mariupol that killed 30 people at the weekend deliberately targeted civilians and the perpetrators must be brought to justice, a senior U.N. official said Monday.

U.N. Under Secretary-General Jeffrey Feltman told an emergency Security Council meeting that a crater analysis by European monitors showed the rockets were fired from territory controlled by pro-Moscow rebels.

"Mariupol lies outside of the immediate conflict zone. The conclusion can thus be drawn that the entity which fired these rockets knowingly targeted a civilian population," said Feltman.

Targeting civilians is a violation of international humanitarian law, he added.

"We must all send an unequivocal message: The perpetrators must be held accountable and brought to justice," he said.

Separatist leader Alexander Zakharchenko initially claimed Saturday to have launched the offensive to seize Mariupol, but as the extent of the bloodshed became apparent he denied ordering an assault on the industrial port on the Sea of Azov.

Kiev-controlled Mariupol is seen as a strategically important link between separatist-occupied territory in eastern Ukraine and the Black Sea region of Crimea, which was annexed by Russia last year.

The 15-member council was meeting after Russia at the weekend blocked a statement condemning the violence in Mariupol and citing Zakharchenko's announcement of the offensive.

Russian Ambassador Vitaly Churkin said the rebel leader's statement was "taken out of context" and accused the Western governments of blindly siding with Kiev in the conflict.

U.S. Ambassador Samantha Power shot back, charging that Russia was seeking to "move the line of Russian-controlled territory deeper into Ukraine" through its support for the new rebel offensive.

Moscow has repeatedly denied backing the rebels despite multiple accounts of Russian troops, equipment and weaponry seen in east Ukraine.

"Despite Zakharchenko's statements, Russia continues to try to play the international community for the fool, and blame the violence on the Ukrainians," Power said.

More than 5,000 people have died in the nine-month conflict and more than one million have been driven from their homes in Europe's worst humanitarian crisis since the Balkans war of the 1990s.

The council has held more than two dozen meetings on Ukraine since the outbreak of fighting that have yielded fierce criticism of veto-wielding member Russia, but no concrete action to address the crisis.