Syrian Infiltration and Raid on Homes of Lebanese Brothers in Arsal 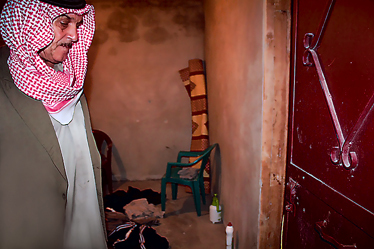 Syrian troops infiltrated into Lebanese territory on Tuesday and raided the homes of two brothers in the eastern town of Arsal, the third such infiltration in two weeks.

An Nahar daily on Wednesday quoted an eyewitness identified by his initials as H.S. as saying that two BTR-type armored personnel carriers along with a pickup carrying Syrian soldiers crossed the border at around 4:00 pm in the area of Kherbet Daoud.

The zone is part of Arsal that lies 10 kilometers from the Ain Arab area in Syria, the newspaper said.

The soldiers raided the homes of Zahri and Abdel Aziz al-Jabawi randomly firing from their machineguns. They later returned to the location where they came from.

An Nahar’s correspondent said the Syrian soldiers had opened the door of Zahri al-Jabawi’s house by firing on it. Several bullets had hit the walls and a television.

The soldiers had later entered a nearby courtyard that is used as a barn in the summer and for gathering used batteries to burn them and extract tin from them.

The owner told the newspaper that a satellite dish and two power generators were missing. He blamed residents of the Syrian town of Qara on the incident saying the raid was carried out against the backdrop of a land property dispute between them and al-Jabawi family.

The members of the Syrian army unit also raided Abdel Aziz al-Jabawi’s house that lies 100 meters away. But they only forced open its doors.

On Monday, more than 20 Syrian soldiers infiltrated 500 meters deep into Lebanese territory in the area of Rajam Beit Khalaf and al-Kalkha in Wadi Khaled in the northern province of Akkar.

Two weeks ago, a unit from the Syrian military accidentally fired at the Lebanese army after it infiltrated an area near the town of al-Mwanseh also in the north.

WTF ? Who will help us against the Syrians? Iran? Israel ? The filthy non-islamic militia?

this is going beyong what is acceptable, and our government can be called only as a government of traitors for failing even to talk about this.
this is truly unacceptable!

Where are the coward resistance, who claims victory against invadors, where they are hiding and not commenting on this volation to Lebanese sovernty. Hezboshaitan is nothing but a resistance againt the Lebanese people only not against invadors like the Syrians.

Our ennemy is Israel.

If the Lebanese were united and patriotic,and i mean all of the Lebanese,Syria would not dare enter one Fu..... inch into lebanon, in small L.None of you know the meaning of patriotism. Brothers aginst brothers following tribal lords, hiding behind relegions.Sick tribal mentality.Lebanon is doomed with shaab like us.Little heaven on earth will never rise.How could you not feel so outraged when Syria step one millimeter into Lebanon.Last time it did some of you said the syrians soldiers were lost because the borders were not marked. Do you believe now that the Syrians know what they are doing. Do you believe that they can do this because we are DEVIDED.

syria can do this because our dear government does not object to it. we will always be divided, all the Lebanese people don't have the same agenda. Some want clear frontiers with our neighbouring countries, peace, no weapon, and economical prosperity, others want to free palestine and be an Iranian/syrian pressure tool for they have no other means to exist. I am affraid that this will not change...

the filthy zionist information war department tries to use insignificant incursions in lebanon, (that were probably made with the knowing and consent of our army), to equal syrian actions with their evil deeds.

@eli
in a way your comments are correct, but to unite you need at least some common groun!
for hizbushaitan and his followers, who have a primary agenda of controlling Lebanon for their masters the iranians, anything is fair: murdering of the best of us, having military zones everywhere in Lebanon from its south to its north including in ouyoun el simane and jbeil, ...
for us patriotic Lebanese, this is beyond of the acceptable, as we need a country not depending on others, a stable country where we can find jobs, and where all its citizens are under the same law...

all the masks are unveilled:
- hizbushaitan is not a resistance, it is a tools for the syro/iranian goons
- our president and its government are traitors for being silent against these acts.
- Aoun and other hizbushaitan followers are traitors.
they should be judged for high traison.

@mowaten So from what I understand you guys are a resistance that only defends Lebanon from Israel, and fails at doing so in any shape or form (i.e. the divine loss in 2006). From your comments, it is also safe to assume that you would totally be fine with the idea of being invaded by Syria.

You see what you do not realize, is that when we were armed with words ONLY it took us 2 months and 13 days to kick the Syrian army out.

Also what you do not realize is that Mahmoud Abbas' U.N. bid did far more harm to Israel than any of your or Hamas' less-accurate-than-angry-birds missiles.

Eli...where were you and other M14 losers when Israel was occupying Lebanon? You were busy helping the Israeli enemy and killing follow Lebanese and anyone who is not an Israeli. As a leftist, I am also opposed to the Syrian and Iranian Regimes, but you are the lowest of the low (I understand some of the comments are made by filthy Zionists to stir more divisions in Lebanon, but I believe some are Lebanese who have not learned any lessons)

Actually ya John from Koura when the Israelis were in the South we were feeding and sheltering "mowaten, jabalamel, lephenicien" and their cousins. Something you took for granted.

Next time the Israelis invade you, we are not going to open our doors for you, let the heroes you keep on voting for figure it out for you.

@john from koura, try to be honest in what you declare... you know what you are saying is untrue but you say just for the sake of your propaganda...

@ Banana republic what you said is 100% correct!! ! hezbollah is not a resistance, it is just a resistance to the establishement of a prosper and democratic country....
which is NOT in their interest otherwise that would mean to DISARM...
so they prefer to keep lebanaon as a middle age state just for their interests.. they are so happy that israel exists because they live from it!!!
this "resistance" is nothing but a mafia supported by blinded people...

(just like the nazi regime or any other totalitarian regime... see and you ll discover they are using the SAME techniques of propaganda and brainwashing if you take time to really analyze it...)