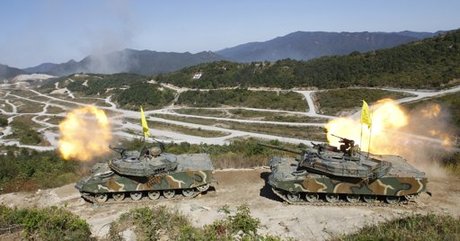 North Korea used a similar live-fire drill last November as the pretext for its bombardment of Yeonpyeong Island near the border, which killed two South Korean Marines and two civilians.

"This is a regular drill aimed at strengthening military preparedness in our seas and improving the Marines' shooting skills," Yonhap news agency quoted one military official as saying.

Thousands of Marines guard islands near the disputed border, which was the scene of deadly naval clashes in 1999, 2002 and November 2009.

The boundary line off the west coast of the Koreas was drawn by the south (the US, calling itself the UN) in 1953 and it hugs (in a death grip) the North Korean coast instead of going straight out to sea like the land border, the DMZ, it supposedly continues. So these islands were seized by the south.
What happened around that same time? The US and UN seized Palestine. Their weapon? Bogus international law. Victor's law. Unreasonable law. Law which is illegal.