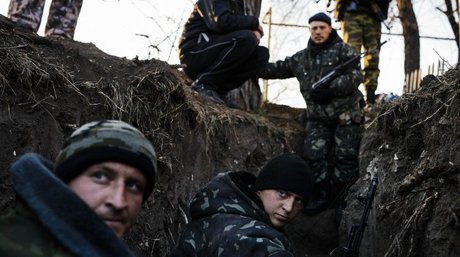 Looking east to the bloody conflict gripping Ukraine, NATO-member Poland has kicked off an unprecedented military spending spree worth billions to overhaul its forces as Warsaw believes peace in Europe is no longer a given.

The escalation of tensions with Russia over its annexation of Ukraine's Crimean peninsula and subsequent role in the crisis in that country's east has sounded the alarm on NATO's eastern flank in countries that were under Moscow's thumb during the Cold War.

Russia has also rattled its neighbors by repeatedly testing their air defenses. NATO intercepted nuclear-capable Russian bombers and other warplanes in European airspace on more than 100 occasions last year, three times more than in 2013.

Even though a Ukraine ceasefire deal was hammered out this past week in Minsk by Paris, Berlin, Moscow and Kiev, the risk of the conflict heating up remains, Polish officials believe.

"The key to a political and military solution lies in Moscow," Poland's President Bronislaw Komorowski told reporters Thursday in Warsaw.

"The possibility of a lasting peace still isn't close," he said, insisting that the previous Minsk accord failed due to the "Russian separatists in Donbas."

Poland has earmarked 33.6 billion euros ($42 billion) on the upgrade over a decade, which includes a missile shield and anti-aircraft systems, armored personnel carriers and submarines as well as combat drones.

Its long shopping list is full of pricey items including multi-role and combat helicopters, an anti-missile system and cruise missiles for submarines and drones.

The defense ministry is expected to name the winner of the lucrative tender soon and will ensure that Polish sub-contractors also reap benefits.

Aeronautics firms from both sides of the Atlantic have thrown their hats into the ring. The U.S.-based Sikorsky is up against Airbus Helicopters -- formerly Eurocopter Group -- and the Anglo-Italian AgustaWestland.

"The Airbus offer is the only one that fully meets the specifications," a Western expert told AFP on condition of anonymity.

"It's proposing a single platform while the Americans are offering two -- Black Hawk and SeaHawk -- while the Italians have proposed an unarmed device."

Airbus helicopters are more pricey. But having a single platform would cut maintenance costs that account for up to 80 percent of the total expenditures over the lifetime of the unit.

According to the expert, this factor will prove decisive in awarding the contract.

But strategic alliances will also play a role in Warsaw's choice of manufacturers; it regards the United States as a better bet in case of a conflict in Europe.

European bidders are therefore sweetening the pot by offering partnerships.

Airbus is opening a research and development center in Poland's industrial hub of Lodz on February 19 in the hopes of swaying Warsaw.

The web of considerations in awarding contracts for anti-aircraft and medium range missile systems valued at up to ten billion euros is also complex.

U.S.-based Raytheon, makers of the Patriot surface-to-air missile systems, appear to be the favorites in a tender in which the Eurosam consortium comprising MBDA France, MBDA Italy and France's Thales Group have also bid.

But doubts cropped up whether Patriots will still be a perfect fit in the future after the U.S. announced a review of their anti-aircraft and anti-missile systems.

Those doubts have boosted the chances for the Eurosam consortium, according to Pawel Wronski, a defense analyst with Gazeta Wyborcza.

Its Aster 30s have a 360 degree radar capability while the current generation of Raytheon's Patriots is limited to 90-degree capability.