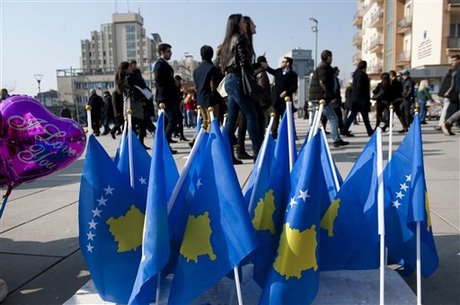 Kosovo marked a somber seventh anniversary of independence from Serbia Tuesday as the mainly ethnic Albanian territory grapples with an exodus triggered by deep economic malaise.

Not a single Kosovo flag was flying on the main street in Pristina, with a special parliamentary session the only official event planned to celebrate the territory's unilateral breakaway from Belgrade in 2008.

In the past, the independence anniversaries have been celebrated with military parades attracting thousands of people.

But government spokesman Arban Abrashi told reporters that events this year should be "modest" because of the challenges facing the impoverished territory.

An economic crisis has over the past few months triggered a mass exodus of tens of thousands of impoverished ethnic Albanians in search of a better life in EU countries.

A third of Kosovo's population of around 1.8 million is jobless and about 40 percent live in dire poverty.

"There are no reasons for glorification on the anniversary, we need to bow our heads and start working," the head of the Kosovo Chamber of Commerce, Safet Gerxhaliu, told AFP.

"The political agenda has dominated much more while economic development has been ignored."

More than 20,000 people have left Kosovo so far this year, according to officials from the main destinations of Hungary, Austria and Germany.

More than 100 countries, including the United States and most of the EU's 28 member states, have recognized Kosovo's independence.

Serbia still refuses to recognize the move, but Pristina and Belgrade normalized ties in 2013 under an EU-brokered deal.

Following the 1998-99 war between Serbian forces and ethnic Albanian guerrillas, a NATO bombing campaign forced Serbian troops to withdraw from Kosovo and cede control of the territory.