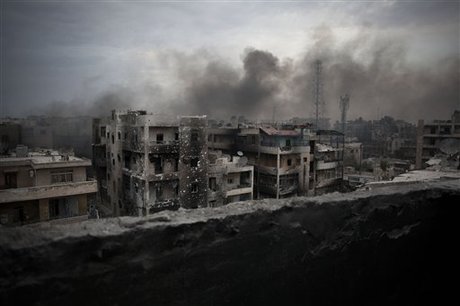 Syrian rebels on Friday seized back territory from regime forces north of Aleppo, stymieing government efforts to sever a key opposition supply route into the city, a monitor said.

The Syrian Observatory for Human Rights said rebel forces had taken back the strategic Mallah Farms area outside the city, as well as several villages seized by government troops in an offensive that began Tuesday.

The advances were a setback for the regime, which had hoped to block the highway leading to the Turkish border from the rebel-held east of Aleppo.

The offensive was also intended to break a rebel siege on two Shiite government-held towns that have been blockaded for more than 18 months.

But on Friday, the Observatory said the regime had failed to achieve either goal in the bloody offensive.

All but one of the villages taken by government troops in the initial fighting have been recaptured by rebels and fighters from Syria's Al-Qaida affiliate Al-Nusra Front, the monitor said.

It reported that the fighting killed 129 regime forces, including five members of Lebanon's Hizbullah, as well as 116 rebel and jihadist forces, among them a military chief from Al-Nusra.

With the capture of the Mallah Farms, the rebels have succeeded in preventing government forces from blocking their supply route and encircling eastern opposition-held Aleppo, the Observatory said.

Before the offensive, regime forces occupied part of the strategic Mallah Farms sector.

"If the regime had taken that territory, they would have completely encircled the rebels in Aleppo," Observatory director Rami Abdel Rahman said.

In Aleppo city, meanwhile, a civilian was killed and 11 others wounded in rebel fire on the government-held Khaldiyeh and Hamdaniyeh districts, state news agency SANA reported.

The government offensive launched as U.N. peace envoy Staffan de Mistura said Damascus had agreed to halt aerial and artillery fire on Aleppo for a period of six weeks if rebels agreed to the same.

No date has yet been set for the proposal, which would be accompanied by the identification of a district in the city for a test-run ceasefire.

Once Syria's industrial powerhouse, Aleppo has been divided between regime control in the west and rebel control in the east since shortly after fighting began there in mid-2012.

In the surrounding countryside, the situation is largely reversed, with rebels controlling much of the area west of the city and the government in control of territory to its east.

As Al Akhbar pointed out, if you control the road with fire, it is as good as closed. And this article does not, unlike the Al Akhbar article, go into why and how Turkey is helping the rebels with this road to Turkey.
Is the national consensus that holds Lebanon in stability the belief that any foreign intervention at any time snywhere is good and that any indigenous political movement of any sort is bad?