Climate Talks Inch ahead on Aid Despite Discord 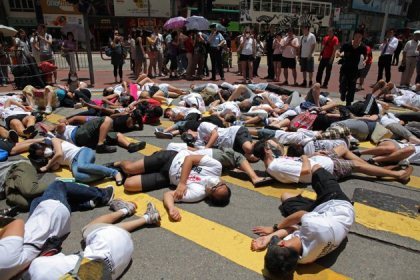 Climate negotiators said they made progress on laying out ways to help poor countries but deep differences remained on core issues ahead of a make-or-break talks in South Africa.

With scientists warning that the planet is far behind on meeting pledges to control climate change, officials from around the world held a week of talks in Panama City to float ideas before the Durban conference opens on November 28.

U.N. climate chief Christiana Figueres said that the talks made "good progress" and pointed to technical work on the shape of a Green Climate Fund that will assist the poorest nations seen as worst impacted by climate change.

Figueres acknowledged a "rough start" on the issue, as developing nations accused the United States and other major donors of blocking discussion on how to raise the $100 billion a year promised for the fund by 2020.

But a draft text produced in Panama City for governments' review reiterates the $100 billion figure and says most will come from public money. It leaves open the idea of a levy on airline and shipping emissions to raise revenue.

The Panama talks "made clear progress on how efforts to limit emissions by developing countries will be matched with necessary support from developed countries in a transparent way," Figueres said.

The developed countries said, ''Look, we're in a financial crisis right now but we do recognize that this is our long-term commitment. We're not shying away from the commitment,'" she told reporters.

Tim Gore of aid group Oxfam was also cautiously upbeat, saying: "We started the week with developed countries not wanting to talk about it and we've ended up with the basis for negotiations."

But there was no sign of a solution on a pressing issue -- what to do after 2012, when obligations run out for rich nations to cut carbon emissions which scientists warn spell dire consequences for the planet's health.

"You've got what seem to be irreconcilable differences and the question is whether there is some way forward that at least continues that conversation further down the road," said Alden Meyer of the Union of Concerned Scientists.

The European Union is the main champion of the Kyoto Protocol and is willing to pledge new post-2012 emissions cuts under the treaty to avoid any gap.

But Canada, Japan and Russia have refused to continue Kyoto and say that any future accord must include all major economies including China, the world's largest carbon emitter, which in turn wants binding action from wealthy nations.

One way forward, according to the U.N. climate chief, would be for some nations make new pledges under Kyoto while other offer separate but clear commitments. "That is going to be the crux of Durban," Figueres said.

But the United States, where many of President Barack Obama's opponents question the science behind climate change, said the time was not right for a binding treaty. America rejected Kyoto, so the world's largest economy would have no obligations if there is a new round.

"We can only consider an agreement that applies with equal legal force to all the major economies -- by which we mean unconditional commitments, not commitments depending on funding," U.S. negotiator Jonathan Pershing said.

The United States was committed to contributing to the $100 billion fund but wanted freedom to determine its own sources, such as private money, he added.

With parts of the European Union in a debt crisis, the bloc's climate negotiator Artur Runge-Metzger said it was unrealistic for developing countries to expect money on the table before more clarity on how the aid fund will work.

"We are willing to talk about initial capitalization (to the fund) but I don't think that we can lead people up the garden path and say this money is going to be there in Durban," he said.

But negotiator Colin Beck of the Solomon Islands -- which like many low-lying nations fears that climate change threatens its survival -- pointed to last year's 110 billion-euro ($150 billion) EU-IMF bailout of Greece.

"If you look at the economic crisis, more money is being spent on Greece, one country alone, than for the long-term health of the planet," Beck said.