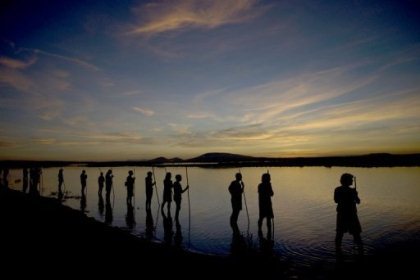 Rare evidence of the long-held belief that humans are still evolving has been unearthed in the parish records of a French-Canadian island on the Saint Lawrence seaway, researchers say.

Poring over church registers containing detailed records of dates of births, marriages and deaths, researchers found the age of women when they had their first child fell from about 26 to 22 years over 140 years from 1799 to just before 1940.

After discounting environmental and social factors, they concluded this substantial change from one generation to the next "largely occurred at the genetic level."

"It is often claimed that modern humans have stopped evolving because cultural and technological advancements have annihilated natural selection," says the study led by Emmanuel Milot at the University of Quebec in Montreal.

"Our study supports the idea that humans are still evolving," it concludes. "It also demonstrates that micro-evolution is detectable over just a few generations in humans."

The age when women have their first child is a "highly heritable" trait.

The researchers point to reports of other insular pre-industrial societies showing that natural selection favored an earlier age for women to have their first child, allowing bigger families and often better health.

Ile aux Coudres's population is very homogeneous, particularly in traits known to correlate with the timing of reproduction such as social class, education and religion.

This made it ideal for statistical analysis.

The study notes that the observed reproduction changes might be responses to improvements in nutrition, observed in the 19th and 20th centuries in Western societies. "Better fed women grow faster, mature earlier and in a better physiological state, and are more fecund."

But that would then have lead to "an increase in infant and juvenile survival rates" whereas in fact over the 140 years those remained stable, the study said.

The researchers also dismissed the possibility that the trend was the result of genetic drift -- the random sampling of genes between generations -- as it was too strong to be random.

The study, "Evidence for evolution in response to natural selection in a contemporary human population," is to be published in the next print issue of the journal "The Proceedings of the National Academy of Sciences" on Tuesday.