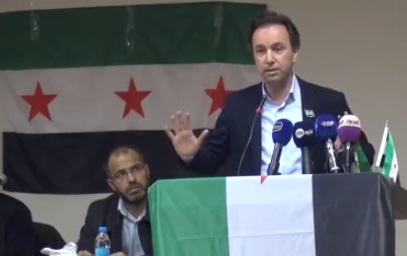 Syria's exiled opposition praised France on Sunday for maintaining its "exemplary" opposition to President Bashar Assad after a group of French lawmakers made a controversial visit to Damascus this week.

"The position of France has always been exemplary, and your country has consistently held to the side of the Syrian people against any attempt to rehabilitate the regime in Damascus under false pretenses," the group's leader, Khaled Khoja, wrote in a letter to the French government.

His letter followed an unofficial trip by French lawmakers to the Syrian capital last week, during which they met with Assad and other senior officials.

The trip reignited debate in Europe over whether it was time to rebuild diplomatic ties with the Syrian regime in order to counter the greater threat from jihadist groups such as the Islamic State.

"Those who argue they should cooperate with the Syrian regime to fight terrorism will only find the phenomenon worsening," he wrote in the letter, addressed to French President Francois Hollande, Prime Minister Manuel Valls, and Foreign Minister Laurent Fabius.

"The National Coalition for Syrian Revolution and Opposition Forces warmly welcomes the firm position expressed by France regarding the cause of the Syrian people and its aspiration to form a civil democratic state.

"This aspiration absolutely requires the departure of the dictatorial regime of Bashar Assad," the letter said.

The lawmakers' visit was strongly condemned by Hollande and Valls, who described Assad as a "dictator" and "a butcher."

According to the Syrian Observatory for Human Rights monitoring group, the conflict in Syria, which started as a pro-democracy uprising seeking Assad's ouster in March 2011 and morphed into a full-blown war, has left more than 200,000 people dead.

the one you do not want to see in your blind support for bashar ...