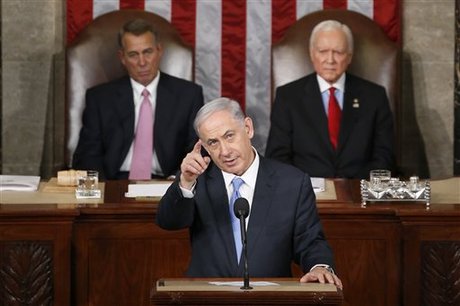 Israeli Prime Minister Benjamin Netanyahu's blistering attack on a U.S. push for a nuclear accord with Iran soured ties with Washington but could boost his prospects in elections this month, experts say.

Netanyahu, seeking re-election on March 17, infuriated the White House with his address Tuesday to U.S. Congress, where he laid out Israeli concerns at an emerging world deal with Iran on its nuclear program.

U.S. President Barack Obama, who refused to meet Netanyahu during his visit to Washington, dismissed the speech as containing "nothing new" and no "viable alternatives" to the U.S.-led negotiations with Iran.

At home, Netanyahu's speech was criticized by opposition parties seeking to unseat him at the upcoming elections as a threat to ties with the powerful American ally.

Gabriel Sheffer, a professor emeritus of political science at the Hebrew University, said the speech was "inappropriate".

While the foundations of the U.S.-Israel relationship would not be damaged by the bad blood between Netanyahu and Obama, the U.S. administration could "press" the Israeli leader over sensitive issues such as "West Bank settlement construction and peace talks with the Palestinians," he said.

Sheffer told AFP that the U.S. could even "diminish the financial aid it gives Israel" as well as reducing arms supplies to its Middle East ally.

Israeli-American pollster and political strategist Stephan Miller told AFP that it was still too early to see the effects of the speech in pre-election poll results.

But the very existence of it, regardless of its content or results, helped distract public discourse away from the socio-economic issues that are Netanyahu's electoral Achilles heel, said Miller.

"What did help Netanyahu was the two weeks of talking about the speech, because for every column inch, for every minute on television that they spoke about the prime minister's speech, Iran, U.S.-Israel, they were not speaking on economic issues," he said.

"He's unable to defend the record or present a plan on the issues that voters care about most, therefore the best strategy, which I think he's implemented, is to attempt to change the conversation."

The speech could also have an important effect on the U.S. administration through the change in U.S. public opinion it seems to have generated, according to Emily Landau, an expert on nuclear strategy and arms control at the Institute for National Security Studies in Tel Aviv.

"It's very interesting to see the articles and commentaries since Netanyahu's speech. There is a marked change in the attitude," she told AFP.

While it was difficult to determine how the speech could affect U.S. policy and talks between world powers and Iran, "following the speech it will be harder for the administration to marginalize those opposing the impending deal," she said.

"More and more people will be asking the Obama administration -- what is your answer to the criticism raised by prime minister Netanyahu? That might force them to give answers, and maybe change their negotiating patterns."

Netanyahu on Wednesday brushed aside criticism of his speech from Obama, who said the Israeli leader "did not offer any viable alternatives" to the emerging world deal.

Netanyahu insisted that he had "presented a practical alternative, which would impose tougher restrictions on Iran's nuclear program, extending Iran's breakout time by years."

Supporters of Netanyahu have been insisting the speech was solely to try to prevent a "bad" nuclear deal with Iran, while his detractors were writing it off as an attempt to gain more votes in the upcoming election.

Eytan Gilboa, an expert on U.S.-Israeli relations and public opinion at Bar Ilan University, said the speech seemed to be motivated by a combination of the two elements.

"Were it the nuclear issue alone, Netanyahu could have done things otherwise," such as "put off the speech until after the elections," with his conduct "raising the suspicion this was only about the vote."

"On the other hand, one cannot ignore Netanyahu's record on the Iranian issue," Gilboa said, referring to the Israeli leader's incessant statements on the imminent dangers of Iran's nuclear program.