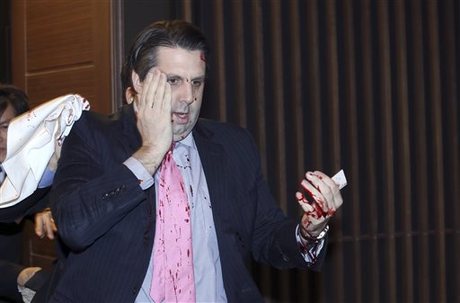 The US ambassador to South Korea, Mark Lippert, was recovering from surgery Thursday after having his face and arm slashed by a knife-wielding activist in an attack applauded by North Korean state media.

The United States condemned the "act of violence" which saw the ambassador rushed to hospital where his condition was described as stable after two-and-a-half hours of surgery that included 80 stitches to a deep gash on his right cheek.

Witnesses described how a man armed with a 25-centimetre (10-inch) paring knife had lunged across a table and attacked Lippert at a breakfast function in central Seoul.

The assailant, dressed in traditional Korean clothes and identified as Kim Ki-Jong, 55, was immediately wrestled to the ground and taken into police custody.

During the assault, Kim screamed a slogan in favour of reunifying the divided Korean peninsula, and later shouted his opposition to ongoing joint U.S.-South Korean military exercises.

In a brief despatch, North Korea's official KCNA news agency called the attack "just punishment" and a valid "expression of resistance" that reflected South Korean public opposition to the joint drills which went ahead over Pyongyang's bitter protests.

Kim was a known maverick activist who had been handed a two-year suspended sentence in 2010 for throwing a rock at the then Japanese ambassador to Seoul.

Video footage showed Lippert, 42, being rushed from the breakfast event and bundled into a police car, one hand pressing a cloth to his bleeding right cheek, and his other hand and clothes smeared with blood.

One of the surgeons said that if the cut on his face had been just a little lower it might have severed his carotid artery "which would have been life-threatening."

He was to remain in hospital for three to four days under observation.

"Doing well & in great spirits!" Lippert tweeted from hospital, saying he and his family were "deeply moved" by messages of sympathy and support.

"Will be back ASAP to advance U.S.-ROK alliance," he added.

The U.S. State Department condemned the "act of violence" and both President Barack Obama and Secretary of State John Kerry called Lippert to offer personal wishes for his recovery.

Lippert was part of Obama's inner circle during the then senator's rise to the White House.

He took on senior roles in national security and defence after the 2008 presidential campaign, before becoming ambassador to Seoul in October last year.

South Korean President Park Geun-Hye condemned the "intolerable" assault, saying it was tantamount to an attack on the South Korea-US military alliance.

A spokesman for the Korea Council for Reconciliation and Cooperation, which hosted the breakfast function, apologised for the lack of security at the event.

"This man suddenly jumped out of his seat when the breakfast was about to start at the table," the spokesman said.

"Other people tried to stop him but the situation unfolded too quickly," he added.

Kim runs a small activist group that pushes for reunification with North Korea and regularly organises protests against Japanese territorial claims to a group of small islands controlled by South Korea.

A Unification Ministry official told Agence France Presse that Kim had visited North Korea at least half a dozen times between 2006 and 2007.

Writing on the group's blog on Tuesday, Kim had complained that the joint U.S.-South Korea drills were blocking dialogue between North and South Korea and preventing reunions for family members divided by the 1950-53 Korean War.

The annual exercises kicked off earlier this week, triggering a surge in tensions with the North.

Nearly 30,000 U.S. troops are permanently stationed in South Korea and the United States would assume operational command in the event of an armed conflict with the North.

Lippert has proved a popular ambassador, tweeting regularly about his life in Seoul and setting up a tongue-in-cheek Twitter account for his dog, Grigsby.

His wife recently gave birth in Seoul and the couple gave their son a Korean middle name.