India Working with Sri Lanka to Repatriate Thousands of Tamils 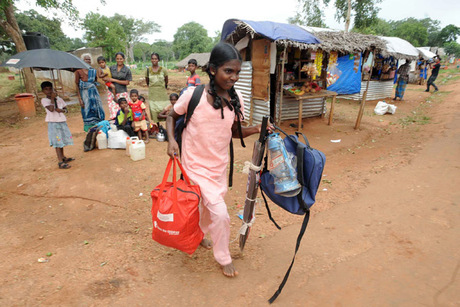 India said Monday it was working with Sri Lanka's new government to repatriate thousands of ethnic minority Tamils who fled the island during nearly four decades of separatist war.

Indian Foreign Secretary S. Jaishankar said discussions were ongoing for the return of 100,000 refugees from the southern state of Tamil Nadu, which is separated from Sri Lanka by a narrow stretch of sea.

"We had agreed when Sri Lanka's foreign minister was here (India) in January to find ways by which these refugees could go back with honor, dignity (and) safety," Jaishankar told reporters.

"We've already had one meeting on the bilateral side on January 30 to discuss the issue."

Modi is expected to visit Sri Lanka's former war zone and Tamil heartland of Jaffna during the three-day visit, starting on Friday.

Some 65,000 refugees are living in 109 government-run camps in the state and another 37,000 are residing elsewhere in the state, Jaishankar said.ref

Sri Lanka's new government has said it will focus on reconciliation after the decades-long war, which claimed an estimated 100,000 lives and exposed deep ethnic divisions.

Tamil Tiger rebels fought for outright independence for their minority community in Sri Lanka until they were crushed by the army in May 2009.

"We are discussing a lot of issues with Sri Lanka and the issue of reconciliation features significantly," said Jaishankar.

"We want to encourage that process."