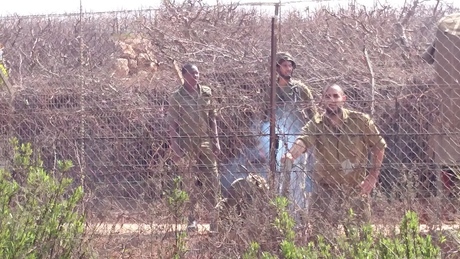 An Israeli unit violated on Tuesday the Blue Line that demarcates the border between Lebanon and Israel, announced the army in a statement.

It said that an eight-member unit crossed the Blue Line near al-Bastra farm in the occupied Shebaa Farms.

It entered 20 meters and tossed a smoke bomb in the area.

Earlier, the National News Agency said that Israeli troops performed maintenance operations on the technical fence near the town of Kfarkila.

A number of soldiers stood watch amid the deployment of military vehicles along the border area.

The Lebanese army and members of the United Nations Interim Force in Lebanon monitored their actions.

Al-Manar television later said that Israeli troops fired 16 shots into the air as one of its units inspected the Blue Line at the Shebaa Farms.

In late February, Israeli troops and armored vehicles combed the border area, carrying out thorough monitoring of the Lebanese side.

In a separate incident, a 20-member Israeli unit advanced towards al-Wazzani river on the southern border, raising alert among Lebanese troops and U.N. peacekeepers.

Israeli troops regularly cross the electronic border fence and sometimes enter Lebanese territory through the U.N.-demarcated Blue Line, which was drawn up following Israel’s withdrawal from south Lebanon in 2000 after a 22-year occupation.

The fence runs parallel to the Blue Line.

On January 28, two Israeli soldiers were killed and seven others wounded as Hizbullah waged a missile attack on their vehicles that were traveling inside the occupied Shebaa Farms.

Hizbullah said the operation was in response to a deadly Israeli air raid that killed six of its fighters, including prominent members, in Syria's Quneitra.

they're looking for trouble, or maybe trying to divert HA's attention to relieve pressure on their isis tools... but beware of playing with fire...

terrorist, you are the best proof of takfiri/israeli cooperation. Keep it going.

is that a martyred jihadi iranian terrorist familia in your avatar?

if you answer to entering Lebanon by 20 meters by a war then the only fool would be you hezbi lovers....

Failk badre, of irak, you mean?

Seing from outside, from the civilized European world, Lebaneses and Israelis looks both like stubborn and stupid kids having arguments out of nothing and with no reasons.

But kids don't know they are immature, so you just need to wait them to grow up.

Israel, Takfiris and HA are all the same - enemies of the Republic of Lebanon.

I read the Holy Bible and the God of Israeli conquers their enemies. The enemies of Israeli will be in the history books but not in their future, because their God is alive.