Cuba Gives its 'Unconditional Support' to Venezuela against U.S. 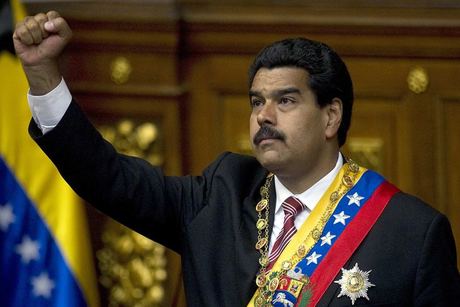 The Cuban reaction marked its first public confrontation with the United States since the two countries began discussions in December on fully restoring diplomatic relations.

Cuba joins other leftist regional governments in closing ranks with Caracas in the deepening U.S.-Venezuela row.

"Cuba again reiterates its unconditional support and that of our people for the Bolivarian Revolution, the legitimate government of President Nicolas Maduro, and the heroic brotherly people of Venezuela," the statement said.

As Venezuela's economy spirals and Maduro cracks down against dissent, friendly nations said they would not tolerate foreign interference.

Ecuador's Foreign Minister warned Monday that the Southern American bloc UNASUR would not allow foreign intervention or a coup in Venezuela.

The European Union said Tuesday it has no plans to follow the U.S. lead and impose sanctions on Venezuela.

In Caracas, an irate Maduro pushed back against the new sanctions.

Shortly after they were announced he recalled his envoy to Washington and late Monday he denounced the U.S. action as "the most aggressive, unjust and harmful blow against Venezuela."

Maduro called the sanctions a "rude outburst" from Obama while surrounded by dozens of ministers and military leaders at the presidential palace.

"You have no right to attack us and declare that Venezuela is a threat to the people of the United States. The threat to the American people is yourselves," he said in the speech that lasted over two hours.

Venezuela's economy is in crisis, with soaring inflation and many basic goods unavailable or out of reach of most pocketbooks on the black market. Maduro has responded by stepping up a crackdown on dissent, arresting opposition figures and frequently speaking of coup plots.

In activating the sanctions, Obama called the situation in Venezuela "an extraordinary threat to the national security" of the United States.

The sanctions targeted Venezuelan officials who the United States said were linked to human rights abuses, including a crackdown on anti-government protests last year that left 43 people dead.

U.S. bank accounts and property of seven officials, including a police chief and intelligence chief, were frozen by the sanctions.

They extend and implement other penalties against the Venezuela adopted by the U.S. Congress last year.

"No one has the right to intervene in the internal affairs of a sovereign state or to declare, without foundation, someone a threat to national security," Cuba said.

"How is Venezuela a threat to America? A thousand miles away, without strategic weapons or having the means or staff to plot against the American constitutional order, the declaration sounds barely credible," the Havana statement said.

Cuban revolutionary leader Fidel Castro congratulated Maduro on his "brilliant and brave" stance against the U.S. in a letter also published Tuesday by the Cuban press.

"Your words will go down in history as proof that humanity can and must know the truth," Castro wrote.