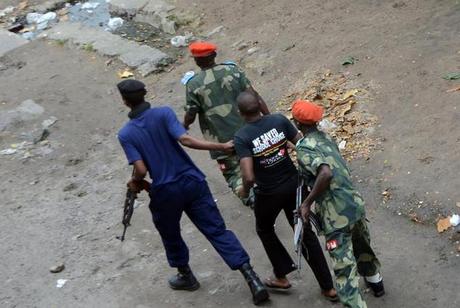 Rights activists arrested this week in the eastern Democratic Republic of Congo during a protest outside local intelligence headquarters have been released, officials said on Wednesday.

The nine protesters had been arrested on Tuesday in the city of Goma as they demonstrated against the detention of another set of pro-democracy activists in the capital, Kinshasa, two days earlier.

Sunday's arrests, which included foreign journalists and a U.S. diplomat, have sparked international concern over freedom of expression in the central African country ahead of 2016 presidential elections.

On Wednesday, the governor of North Kivu province, where Goma is the capital, said the nine activists were released after "verification" by intelligence agents.

"I am appealing for calm, and any claims should be made in compliance with the country's laws," Julien Paluku told AFP.

On Tuesday morning, security forces cracked down on the protesters from the Struggle for Change (Lucha) organization outside the National Intelligence Agency (ANR) in Goma.

Lucha said on its Twitter account that the activists had suffered "torture and blackmail" by ANR forces.

Two Belgians -- a journalist and a researcher -- were also set upon by security force officers at the protest.

Belgian freelance journalist Alexis Bouvy told AFP that his female compatriot was "thrown to the ground by the ANR people and injured her shoulder when she fell".

"The ANR agents were very aggressive, beating up the Congolese," Bouvy added.

Tuesday's protest took place in response to the detention of around 30 people in Kinshasa, more than 1,500 kilometers (930 miles) to the west of Goma.

Security forces had swooped on a press conference after a meeting the activists said was held to mobilize young people to press for good government.

Those arrested on Sunday included visiting pro-democracy activists belonging to the Senegalese Y'en a Marre (Enough is Enough) movement, a major player in the fight against a third term for Senegalese president Abdoulaye Wade (2000-2012).

They also included those from Burkina Faso's Balai Citoyen, which helped topple president Blaise Compaore from power in October 2014.

An American diplomat working for USAID and five journalists covering the news briefing -- for AFP, the BBC and Belgian state broadcaster RTBF as well as Congolese TV channel Antenne A -- were taken in for questioning.

The diplomat and all the journalists have since been released.

"The Congolese government’s detention of pro-democracy activists is the latest alarming sign of a crackdown on peaceful protest ahead of next year’s presidential elections," said Ida Sawyer, a senior HRW Africa researcher.

Tensions have been rising in the DRC after up to 42 people died in violent protests in Kinshasa in January.

Protests had erupted over an electoral bill that was seen as offering a way for President Joseph Kabila to stay on beyond the end of his mandate in 2016.