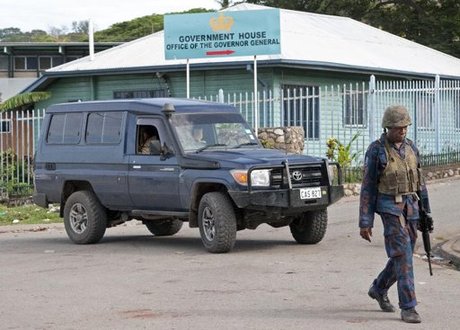 The government of Ebola-hit Guinea on Wednesday urged a dialogue after the three main opposition leaders called for renewed protests against President Alpha Conde over upcoming elections.

"I would like to repeat the government's desire to find ways to restore confidence in the electoral process and to respect the constitution. But especially to preserve social peace," government spokesman Albert Damantang Camara told a press conference.

The opposition boycotted parliament earlier this month in protest over the timetable for presidential elections, accusing Conde of using the Ebola epidemic as an excuse to postpone voting and refusing to enter into a dialogue over the timetable.

The former premiers called on demonstrators to support their demands, especially the call to bring forward local elections due in March next year.

"The election schedule has been decided by an independent body. If part of the political class does not agree with the program we can discuss it, to identify the real problems it poses and find real solutions," the government spokesman said.

"Questioning the legitimacy of the president of the republic... is we think excessive in relation to the issues at stake," Camara said in a statement.

"We call on the entire political class to enter into a dialogue. We are open to solutions, and we are listening. This dialogue must take place quickly and without conditions."

In interviews with Agence France Presse in Paris, Diallo, president of the opposition Union of Democratic Forces of Guinea, said discussions with the authorities had been ineffective and appealed for international pressure, while Toure vowed to launch protests on their return to Conakry on Thursday.

More than 10,000 people have died of Ebola, almost all in west Africa, since it emerged in Guinea in December 2013.

One of the poorest countries in the region despite vast potential for mineral exploitation, Guinea was run by a succession of autocratic rulers after gaining independence from France in 1958.