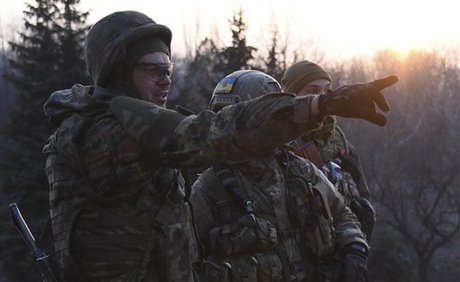 Four people were killed and 20 injured when a passenger bus hit a landmine near a government-controlled town in eastern Ukraine, local officials said Thursday.

The bus had taken a side road in order to avoid a government checkpoint near the town of Artemivsk, some 50 kilometers (30 miles) north of the separatist stronghold of Donetsk, late Wednesday, said Ilia Kiva, a government-loyal deputy police chief in the Donetsk region.

According to Kiva, rebels fired grenades at the bus after hearing the noise, but said that the land mine had caused all of the deaths and injuries.

Military spokesman Andriy Lysenko told reporters that 20 people had been injured in the blast. A spokesman for the Donetsk regional administration told Agence France Presse at least three of the injured were in a serious condition.

"The driver had wanted to avoid a Ukrainian checkpoint near Artemivsk by going through the field and he drove over a landmine," he added.

Elsewhere, the army said rebels had fired on their positions on eight occasions through Wednesday night, but reported no fatalities or injuries.

The area surrounding Donetsk continued to see the heaviest fighting, with rebels firing 120mm mortar shells at the village of Pisky, close to the airport which rebels took in January following fierce fighting, the army said in a statement.

Small arms fire was also used in the village of Shyrokyne, close to the strategic port of Mariupol, the largest city still under government control in the conflict zone, it added.

Lysenko claimed that the army had received intelligence that two columns of military equipment, including tanks, had passed over the Russian border into rebel-held territory.

In response, rebels said the Ukrainian army had sent three tanks to the border of the self-proclaimed Lugansk People's Republic, in contravention of a delicate ceasefire agreed over a month ago, according to Russian state news agency RIA Novosti.

More than 6,000 people have died in fighting between pro-Russian rebels and government troops in eastern Ukraine since April. Despite the peace deal, daily skirmishes continue.

Within the conflict area, landmines have been strewn across rural roads and agricultural fields in an attempt to make them impassable.

The Kiev authorities in January set up a network of checkpoints for residents travelling between government held-areas and rebel-held land.

Difficulties in obtaining the paperwork necessary to pass the checkpoints means many try to bypass them.