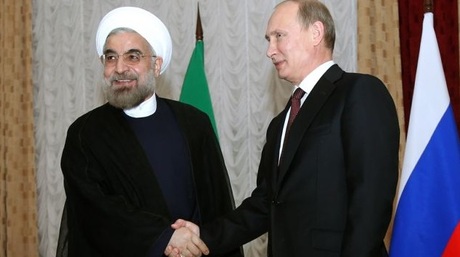 "Hope was expressed for success at the new round of talks in Lausanne," the Kremlin said in a statement after Rouhani called Putin to discuss the negotiations in Switzerland.

The two leaders "noted with satisfaction the progress" made over previous weeks as time ticks down towards a deadline to reach the outlines of a deal at talks between six world powers and Iran.

After 18 months of intense negotiations around the globe, U.S. Secretary of State John Kerry launched a final round of talks with his Iranian counterpart Mohammad Javad Zarif before the deadline on March 31.

The world powers negotiating with Iran since late 2013 want Tehran to disable parts of its nuclear infrastructure to put an atomic bomb out of reach and end a 12-year standoff.

Russian news agencies have quoted official sources as saying that Foreign Minister Sergei Lavrov could fly to Switzerland late Friday if there is hope of an agreement.

Amid the debate over Iran's nuclear future, Russia -- facing isolation from the West over the Ukraine crisis -- has maintained good ties with Tehran and last year inked a contract to supply it with two nuclear reactors for a Russian-built plant.