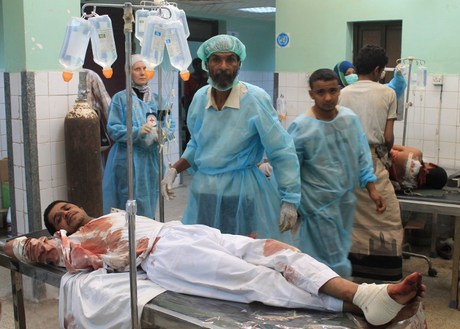 The Red Cross expressed deep concern Thursday over the impact of Saudi-led air strikes on the Yemeni capital, urging all sides in the conflict to strive to spare civilians.

The International Committee of the Red Cross (ICRC) said it was "worried by the recent escalation of violence" in Yemen, and at reports that civilians had been killed in air raids on Sanaa.

"Ordinary Yemenis, already hit hard by years of conflict, are now enduring the effects of this escalation," it warned in a statement.

Saudi warplanes launched strikes on the Huthi rebels on Thursday in a bid to stop their advance on embattled President Abedrabbo Mansur Hadi's refuge in the main southern city of Aden.

Riyadh said it had assembled a coalition of more than 10 countries for the operation it dubbed "Firmness Storm."

ICRC stressed that international humanitarian law requires all countries taking part in the Saudi-led operation, as well as the Yemeni military and armed groups to "strive to avoid harm to civilians."

It also called on all involved in the conflict "to show respect for human life, to treat detainees correctly and to help ensure that the wounded have access to the medical care they require."

"Medical facilities must be safeguarded, and may not be attacked," it said.

ICRC, which has a 300-strong team in the country, said the al-Joumhouria hospital in Aden in recent days had received 40 wounded people.

The organization said it had donated triage tents to the hospital, along with medicine and medical supplies.

It had also provided medical supplies to the three hospitals dealing with the most casualties from last Friday's Shiite mosque bombings in the capital, claimed by the Islamic State jihadist group, which killed at least 142 people and injured 340 others.

In Taiz, in southern Yemen, where violent demonstrations reportedly left eight dead and more than 140 injured, ICRC said it had provided medical supplies to treat up to 70 patients.