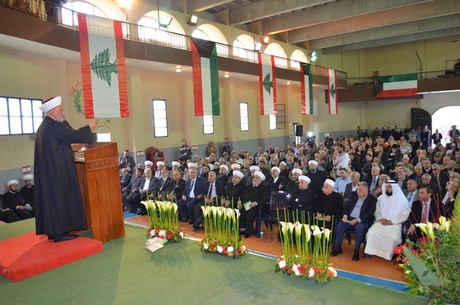 Grand Mufti Sheikh Abdul Latif Daryan called Sunday for pressing on with the bilateral dialogue between Hizbullah and al-Mustaqbal movement, as he suggested expanding it into all-party talks.

“We support the dialogues that lead to positive results that can preserve this country's unity and security and its citizens' piece of mind,” Daryan said.

A war of words had erupted in recent days between the two parties over a testimony by head of al-Mustaqbal bloc MP Fouad Saniora before the Special Tribunal for Lebanon, which has accused five Hizbullah members of involvement in the 2005 assassination of ex-PM Rafik Hariri.

Saniora told the STL that Hariri had confided to him that “several assassination attempts by Hizbullah” against him had been discovered.

The fresh tensions were further aggravated by conflicting stances on the Saudi-led operation against Huthi rebels in Yemen. The leaders of the two parties, Sayyed Hassan Nasrallah and ex-PM Saad Hariri, have however expressed determination to carry on with the dialogue.

“Yes, let al-Mustaqbal movement engage in dialogue with Hizbullah, and it is prohibited to stop this dialogue, as we're pinning a lot of hopes on it,” Daryan added.

“It has achieved positive results and ended sectarian tension,” the mufti noted, calling for “immunizing this situation through further progress in the talks.”

He added: “This dialogue must be completed with an inter-Christian dialogue and another among all political parties.”

Turning to the protracting presidential vacuum, Daryan said “it is unacceptable to keep the country without a president for such a long period,” urging all parties to reach an agreement over the election of a new president and warning that “the continued presidential void is threatening Lebanon's security and stability.”

As for the rapid developments in the Arab world, the mufti voiced support for “Arab unity and Arab solidarity,” lauding the Arab League's decision to create a joint Arab military force.

Daryan also backed the Saudi-led military intervention in Yemen against Shiite Huthi rebels. “In Yemen they rejected the peace initiative, so they faced a firm decision (Firmness Storm campaign), and we had already supported this firm, brave and right decision for the sake of Yemen's unity, stability and sovereignty,” he said.

How can anyone expect something serious or tangible from "polite chating"