White House Tells Iran to 'Live Up to Rhetoric' 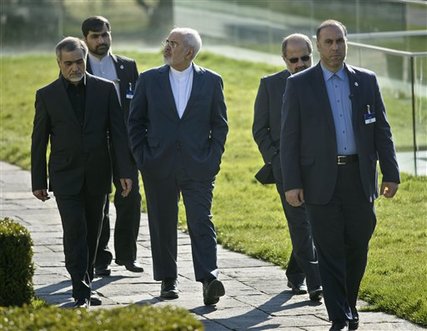 The White House challenged Iranian negotiators on Sunday to "live up to their rhetoric" and strike a nuclear deal with world powers before a March 31 deadline expires.

Iran and six world powers have reached tentative agreement on key parts of a deal sharply curtailing Tehran's nuclear ambitions, Western diplomats said in Lausanne, where negotiators are racing to nail down an accord by midnight Tuesday.

"We've been negotiating for more than a year and ultimately it's time for the Iranians to send a clear signal to the international community about whether or not they are willing to make the serious commitments required," White House press secretary Josh Earnest told ABC's "This Week."

The Iranians must "basically live up to their rhetoric, that they are not trying to acquire a nuclear weapon. So if they can make those commitments, they should be able to do that by the end of March," he said.

"Very quickly. Listen, the sanctions were working," Boehner said on CNN's "State of the Union."

Boehner added that he had "serious doubts" about the ongoing talks in Switzerland.

Blender does not want a treaty, he and his Israeli sponsors want total capitulation by the Iranian Government. The Iranian hard liners will not capitulate, they would end he talks and return to unrestricted enrichment. If they didn't, then there would be an internal revolt, regime change, chaos and then what do you get I charge of the Iranian nuclear program?
If you press any country to capitulation, that is not a point of equilibrium and stability, but is a very unstable situation. Obama is working against not just the Iranians, but the Israelis and Saudis and their benefactors in Congress to work a good result for all.