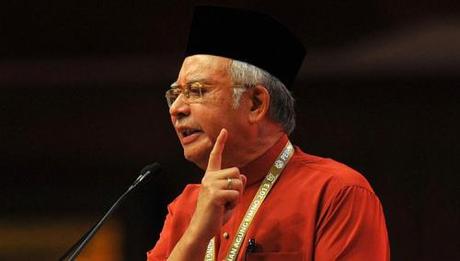 Mahathir's broadside is significant because the retired 89-year-old former strongman spearheaded a campaign against his own successor, Abdullah Ahmad Badawi, that resulted in Abdullah's 2009 ouster and replacement by Najib.

In his widely read blog, Mahathir waded into previously taboo territory in calling for the truth to be revealed in a sensational scandal linked to Najib that concerned alleged corruption in a submarine purchase and the still-unexplained 2006 murder of a Mongolian woman.

He also raised questions over a state-owned investment company launched by Najib that is mired in $11 billion of debt and has been hit by numerous reports of alleged fraud and questions over the whereabouts of hundreds of millions of dollars.

Mahathir, whose 1981-2003 rule was marked by crony capitalism and a sharp curbing of civil liberties, has ramped up pressure on Najib since the premier led the long-ruling United Malays National Organisation (UMNO) to its worst showing ever in 2013 polls.

But Thursday's comments were Mahathir's harshest yet.

"UMNO members and their leaders must realise that (the ruling regime) will lose if (Najib) leads UMNO," into the next elections due by 2018, he said.

"It is not easy for me to write this blog post. But for the sake of the (Malay) race and the country I have to expose all of this."

The 2002 purchase of French submarines -- negotiated when Najib was defence minister -- has long been clouded by accusations of kickbacks to Malaysian officials. The government denies wrongdoing.

Altantuya Shaariibuu, a Mongolian woman who purportedly acted as a translator in the negotiations, was killed in Malaysia in 2006 and her body blown up by military-grade explosives.

Suspicions have swirled for years that Altantuya was murdered to keep her quiet about the kickbacks.

Two bodyguards for Najib were convicted of murder and condemned in January to hang. One is in Australian custody, where he fled late last year.

A motive for the killing was never established.

"People are asking who gave the orders," Mahathir wrote.

"This involves human lives. It would be cruel if (the bodyguards) die just for carrying out orders."

There are fears that the troubled Najib-launched investment fund, 1Malaysia Development Berhad (1MDB) could collapse and hit the economy, concerns that have added to recent downward pressure on the ringgit currency.

Najib has ordered the auditor-general to look into 1MDB but has denied any wrongdoing.

Analysts have said Mahathir's campaign so far looks unlikely to topple Najib, who remains strong in the party.