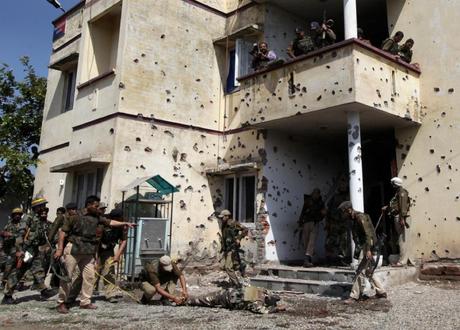 Suspected rebels in Indian Kashmir killed a police officer and a soldier in a shoot-out on Thursday, police said.

The battle broke out when government forces cordoned off a village after receiving intelligence that two armed militants were there.

"One SPO (Special Police Officer) and a soldier were killed in the exchange of fire," director general of police K Rajendra told Agence France Presse.

Three other government forces and a civilian were also wounded during the firefight, police said.

Kashmir has been divided between India and Pakistan since the two countries won independence from Britain in 1947. Both claim the territory in its entirety.

Several rebel groups have been fighting Indian forces since 1989 for independence or a merger with Pakistan. The fighting has killed tens of thousands, mostly civilians.

Violence in the region has steadily declined during the last decade but armed encounters between rebels and government forces occur regularly.