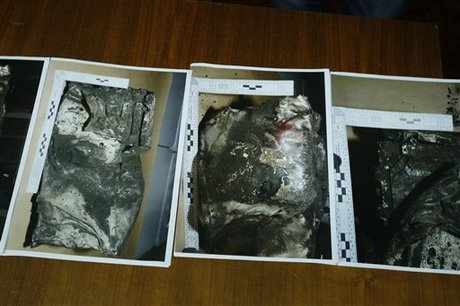 Information from the second black box found in the wreckage of the Germanwings flight that crashed in the French Alps confirms the co-pilot acted deliberately, investigators said Friday.

"A first reading shows that the pilot in the cockpit used the automatic pilot to descend the plane towards an altitude of 100 feet (30 meters)," said the French BEA crash investigation office in a statement.

"Then, several times during the descent, the pilot changed the automatic pilot settings to increase the aircraft's speed," added the investigators.

The latest information appeared to confirm the theory that co-pilot Andreas Lubitz deliberately smashed his plane into the mountains, killing all 150 people on board.

The box, found blackened by the fireball and buried deep in the mountain scree, was transported to Paris late Thursday and specialist investigators began to analyze the data immediately.

"Work is continuing to determine the precise sequence of events during the flight," the BEA said.

Data from the first black box, which records conversations in the cockpit, suggested that Lubitz, 27, locked his captain out and then deliberately set the plane on a deadly collision course with the mountains.

The plane smashed into the mountains last week at a speed of 700 kilometers (430 miles) an hour, instantly killing everyone on board -- half of them German and more than 50 from Spain.

It emerged on Thursday that Lubitz had searched online for information about suicide and cockpit doors.

German prosecutors have said Lubitz was diagnosed as suicidal "several years ago", before he became a pilot.

Lufthansa, the parent company of Germanwings, has come under huge pressure since the crash after it was revealed that Lubitz had told his bosses that he had suffered from severe depression.

The German flag carrier said the co-pilot had told the airline in 2009 about his illness after interrupting his flight training.

Doctors had recently found no sign that he intended to hurt himself or others, but he was receiving treatment from neurologists and psychiatrists who had signed him off sick from work a number of times, including on the day of the crash.

Police found torn-up sick notes during a search of his apartment after the crash.

The first black box suggested that people were only aware of what was to happen to them in the final seconds.

However, French and German media claim to have seen a video purportedly showing the final moments aboard the doomed airliner, which they said was shot on a mobile phone that somehow survived the crash.

Several airlines and countries around the world have since ruled that two authorized crew members must be present in the cockpit at all times.

Air France said that they have had two people in the cockpit since Wednesday as a "temporary" measure after the European aviation safety agency issued recommendations.