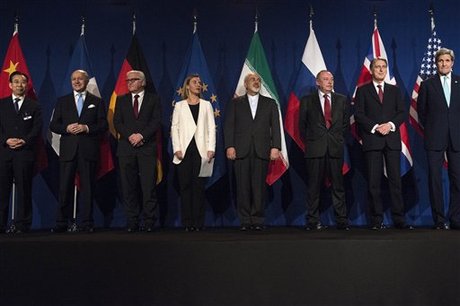 Iran and world powers scored a major breakthrough with a framework deal aimed at stopping Tehran getting nuclear weapons, but major work is needed to finalize the potentially historic accord, analysts said Friday.

In addition, those alarmed by what was agreed, not least U.S. President Barack Obama's Republican opponents, may yet scupper the entire process before the June 30 deadline to sign on the dotted line.

"This accomplishment is not final. It is as fragile as the forces against it are formidable," Ali Vaez from the International Crisis Group told AFP.

"A lot of thorny issues will have to be resolved in the next three months."

Iran and six major powers late on Thursday agreed after 18 months of talks, culminating in a grueling marathon of sleepless nights in a Swiss hotel, the main parameters of what the final deal will look like.

According to the U.S., Iran has promised to slash its uranium enrichment capacity -- which makes nuclear fuel but also the core of a bomb -- by two-thirds and reduce its enriched uranium stock by 98 percent.

Iran will also change the design of a reactor under construction at Arak so that it cannot produce plutonium, the alternative to uranium for a bomb, and submit to ultra-tight U.N. inspections.

This, the U.S. says, will extend the "breakout" time needed to make one bomb's worth of nuclear material to one year and make any dash to get the bomb easily detectable, giving the world ample time to react to any such move by Iran.

The framework agreement was however very light on detail on when exactly all this will happen once the final comprehensive deal is agreed on June 30.

Iranians, who celebrated on the streets in the early hours of Friday when the news from Lausanne came through, want to see sanctions lifted quickly to boost the economy and attract foreign investment.

Equally impatient are Iranian hardliners who want to see the fruits of President Hassan Rouhani's attempts at rapprochement with the West since his election in 2013.

But the sanctions will not all be lifted in one fell swoop on July 1.

Instead they will be tied to Iran first carrying out what it has undertaken to do, something to be verified by the U.N. atomic watchdog, the International Atomic Energy Agency.

In addition, there will be the possibility for a "snap" back of the sanctions if Iran violates the deal.

"We have been very clear, both publicly and privately, a final agreement will not rely on promises. It will rely on proof," U.S. Secretary of State John Kerry said in Lausanne on Thursday.

The task of the next three months therefore will be to hammer out in minute detail a timetable for which sanctions are eased when, and what Iranian actions they will be dependent upon.

One potential snag is that in addition to slashing its capacities, Iran will also have to clear up allegations that before 2003, and possibly since, it did research into making a nuclear weapon.

A long-running probe by the IAEA into this infamous "possible military dimensions" (PMD) file is stalled, with Iran rejecting it as false information provided to a gullible and partial IAEA by its enemies.

Other potential problem areas are the language that goes into a mooted new U.N. Security Council resolution to replace the six others that will be lifted, and the mechanism for determining violations.

"The agreement also does not spell out the specific timeline for Iran's compliance with the IAEA investigation," Arms Control Association expert Kelsey Davenport told AFP.

"Nor does it lay out the reciprocal sanctions relief for each nuclear step taken by Iran," she said, adding however that the "critical importance" of Thursday's understanding "cannot be understated".

According to Vaez, the most important "wildcard" is U.S. lawmakers who believe the concessions made constitute a humiliating climbdown that will not do enough to stop Iran getting the bomb.

Republican pressure could make it hard for Obama to lift U.S. sanctions while mooted new legislation they want to bring could impose further measures and force the president to get lawmakers' approval for the deal.

"The U.S. Senate should avoid taking any steps to undermine this framework," Tom Collina from Ploughshares Fund said. "This could kill the deal before it is finished."