Al-Nusra, Allies Advance on Syria Army Base near Idlib 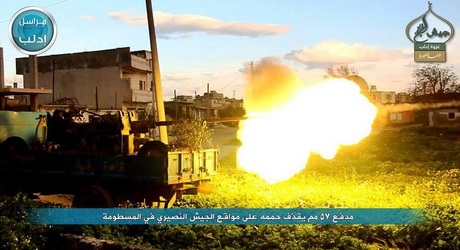 Fighters from Al-Qaida's Syrian affiliate and allied groups advanced Friday on a key government-held military base in northwestern Idlib province, a monitor said.

The advance follows the capture of provincial capital Idlib by Al-Nusra Front and its allies on Saturday.

"Violent clashes have been underway since Thursday night between the army and Al-Nusra and its allies... around the Mastuma base," the Britain-based Syrian Observatory for Human Rights said.

The base, seven kilometers (four miles) south of Idlib city, is the biggest regime base in the province, according to Observatory director Rami Abdul Rahman.

The opposition groups had launched a "preventative attack on the base" where regime reinforcements were arriving ahead of a possible bid to recapture Idlib city, he said.

With the fall of the city, regime forces in the province control only two towns and a handful of districts, along with the Abu Duhur military airport and five military bases.

Elsewhere, the Observatory said jihadists from the Islamic State group had seized more territory inside the Palestinian Yarmuk camp in Damascus.

The group, which has never been so close to the heart of Syria's capital, launched an assault on the camp Wednesday, after Palestinian groups inside arrested several IS members.

The jihadists were pushed back, but Thursday encroached again inside the camp, which has been under regime siege for more than a year.