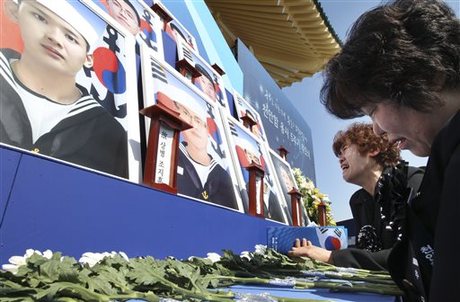 Newly shaven-headed and clad in white mourning robes the grieving parents of the victims of last year's Sewol ferry disaster began a marathon march Saturday to press for an independent inquiry into the tragedy.

More than 200 people are participating in the march from Ansan city to the capital Seoul, mostly the parents of the 250 students from the same high school who perished when the overloaded ferry sank off the southern island of Jindo on April 16.

With the first anniversary of the tragedy drawing near, the 35 kilometer march is being held to call for the sunken ferry to be brought to the surface to recover those bodies still unaccounted for.

The marchers started off from a public park in Ansan where a giant altar to the victims, complete with their black-ribboned portraits and flowers, has been in place over the past year.

Some wept as they set off carrying pictures of their daughters and sons. Before the march started, many parents shaved their heads in a show of grief and determination.

They chanted slogans and held banners alleging that the government was "insulting" victims' families by "waving money under their noses" instead of seeking to ensure a thorough and independent investigation.

Over the past year, families have repeatedly staged street protests and sit-ins, demanding a meeting with President Park Geun-Hye and urging her to deliver on her promise to continue the search for those still missing.

"Almost a year has passed since the tragedy but the president has not delivered on her promise. We are going to Seoul to hear from her", said Chun Myeong-Sun, a representative of the families.

The accident -- blamed by many on regulatory failings, official incompetence and the ship's illegal redesign -- prompted Park to vow a complete overhaul of national safety standards.

Following months of political bickering, the South Korean parliament passed a bill in November initiating an independent investigation into the sinking.

But relatives have accused the government of seeking to hamper the probe and contain any political fallout by appointing government officials to key posts in the 17-member inquiry committee.

Committee chairman Lee Suk-Tae -- one of the members nominated by the families -- said this week that the government, which should be the very subject of the investigation, was seeking to lead the committee, something he labeled "unacceptable."

More than 50 people have been put on trial on charges linked to the sinking, including 15 crew members -- who were among the first to climb into lifeboats.

The Sewol's captain was jailed in November for 36 years for gross negligence and dereliction of duty, while three other senior crew members were sentenced to jail terms of between 15 and 30 years.

The families plan to hold a candle-lit vigil when the protest march arrives in Seoul on Sunday.