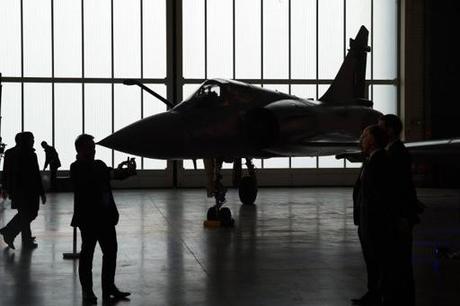 India's prime minister announced Friday that New Delhi had ordered 36 Rafale fighter jets from France in a multi-billion-euro agreement that has been years in the making.

Standing alongside his counterpart Francois Hollande on a visit to France -- the first leg of his maiden trip to Europe -- Narendra Modi finally relieved the frantic speculation over whether tortuous, years-long negotiations on buying the jets would ever bear fruit.

"I asked the president (Hollande) to supply us with 36 Rafale jet fighter planes, the ready-to-fly models," Modi said at a joint news conference at the Elysee Palace.

While long-blocked exclusive negotiations between the two sides had initially focused on 126 French Rafales, the 36-jet order is manufacturer Dassault's biggest yet abroad -- estimated to be worth nearly four billion euros ($4.2 billion).

Negotiations to buy the planes kicked off in 2012 but had been bogged down over cost and New Delhi's insistence on assembling a portion of the high-tech planes in India.

Defense Minister Jean-Yves Le Drian told reporters after Modi's announcement that all 36 jets would be manufactured in France.

As such, India has launched a vast defense modernization program worth some $100 billion.

Modi, a right-wing Hindu nationalist, was effectively blacklisted by the European Union for years, accused of encouraging deadly communal riots in 2002 in the western state of Gujarat, which he governed for over a decade.

But after his landslide victory in a general election last year, and with India's economy now growing faster than even China's, France is rolling out the red carpet for the one-time outcast.

"France has always been a reliable supplier for India from jet fighters to submarines," Modi said, pointing to cooperation in a number of sectors such as space, nuclear energy and defense.

Hollande said he was "deeply moved" by the announcements and said they took the partnership between the two countries "into a new gear."

Nothing was announced on this particular accord, but India and France signed agreements in a raft of other sectors such as space and transport.

They also discussed cooperation in the fight against extremism.

But Hollande expressed his "indignation" after Pakistani authorities on Thursday freed the alleged mastermind of the 2008 Mumbai attacks on bail. Modi made no comment on the issue.

After a two-day whistlestop tour that will take him from northern to southern France -- with a short breather to take in the Paris sights from a boat ride on the Seine -- Modi will jet off to Germany.

He will end his trip further afield in Canada, home to a large Indian diaspora.

Modi is seeking to attract investors as he tries to rewrite India's reputation as a tricky place to do business, beset by bureaucracy, corruption and a stringent tax regime.

The government has already relaxed rules for foreign investors, eager to create work for the millions who enter India's job market each year.

"Our main challenge is to create jobs for the young -- 800 million Indians are less than 35 years old," he told Le Figaro daily.

While Modi was quick to meet U.S. President Barack Obama and Asia's top leaders after his election last May, it has taken him nearly a year to travel to Europe.