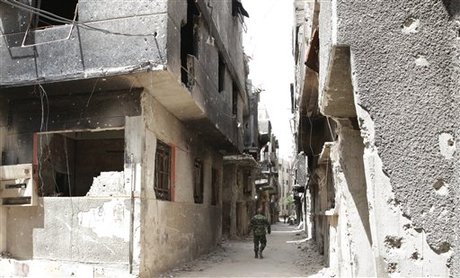 Jihadists from the Islamic State group have lost ground to Palestinian fighters in Syria's Yarmuk camp, Palestinian officials and a resident said on Tuesday.

U.N. officials in Syria said, meanwhile, they were discussing ways of getting humanitarian aid into the camp and helping residents who have fled Yarmuk.

IS fighters have retreated from much of the territory they seized in the camp in southern Damascus after entering it on April 1, a resident calling himself Samer told AFP.

"We haven't even seen any Daesh members in over three days," he said, using the Arabic acronym for IS.

The withdrawal was confirmed by an official from a pro-Syrian regime Palestinian faction fighting against IS inside Yarmuk.

"There are intermittent but ongoing clashes between Palestinian factions and IS," said Khaled Abdel Majid, head of the Palestinian Popular Struggle Front, adding that IS had withdrawn from most of the neighborhoods it previously controlled.

IS fighters were now confined largely to the camp's southwest, with Palestinian factions -- both pro- and anti-Syrian regime -- controlling most of the east and north, Palestinian sources said.

Regime forces are stationed outside the camp and have maintained a tight siege, but Abdel Majid said the Palestinian factions had established a "joint operations room" with government forces.

A Syrian security source in Damascus also said "the Palestinian factions have made progress and were able to recapture key points... and the operation is ongoing."

The Palestinian forces inside the camp include the anti-regime Aknaf Beit al-Maqdis group that has fought alongside Syrian rebels.

Fighters from the Palestinian Fatah and Democratic Front for the Liberation of Palestine groups are not participating, Palestinian officials said.

Both groups have said they want Yarmuk to remain neutral and do not want to be seen as taking a side in the conflict between Syria's government and opposition forces.

The IS advance rattled residents and the government, with Syria's reconciliation minister saying a military operation would be necessary to expel the jihadists.

Their move into Yarmuk plunged it into further hardship, worsening already dire conditions caused by the siege which has gone on for more than 18 months.

Once home to some 160,000 Palestinians and some Syrian residents, Yarmuk's population had shrunk to just 18,000 by the time IS moved in.

According to Palestinian sources, some 2,500 civilians have managed to escape the camp, but aid agencies and the United Nations have warned of a serious humanitarian crisis and urged all parties to allow the creation of a humanitarian corridor.

Pierre Krahenbuhl, head of the U.N. agency for Palestinian refugees UNRWA, told AFP in Damascus on Tuesday that the situation in Yarmuk remained "catastrophic in human terms".

He said UNRWA was unable to enter the camp but was seeking "to find ways to resume distributions for people who are inside".

"It will be very difficult but we will try, we will discuss how to find places where distributions can take place that people can reach safely."

He also stressed the symbolic importance of Yarmuk, the largest Palestinian camp in Syria.

"For Palestine refugees, Yarmuk is something very special. They have no intention of abandoning Yarmuk. Yarmuk is a place that is very deep in their identity."