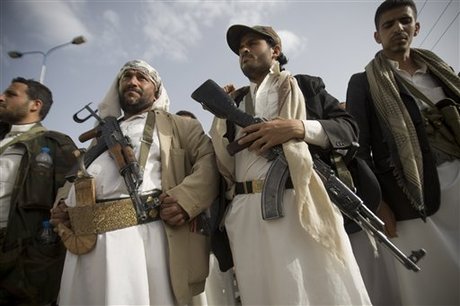 Two suspected al-Qaida militants were killed overnight in Yemen in a drone strike believed to have been carried out by the United States, a tribal source said on Friday.

The late night strike targeted a vehicle in Habban, southeast of Ataq, the  main town in southern Shabwa province.

It "killed the two occupants, two members of al-Qaida," said the source, identifying one of the victims as Khaled Atef, a cousin of the province's al-Qaida chief.

Among its gains, al-Qaida in the Arabian Peninsula (AQAP) has seized almost all of Mukalla, the capital of Hadramawt province.

United States Defence Secretary Ashton Carter said last week that al-Qaida was seizing terrain during the chaos in Yemen, but vowed that Washington would continue to combat the extremist group.

The U.S. classifies Yemen-based AQAP as the deadliest franchise of the Sunni extremist movement.

President Barack Obama's administration had long hailed a partnership with the Yemeni government as a successful way to wage war against al-Qaida.

Washington sent U.S. special forces and provided weapons to the government in Sanaa to help the army hunt the militants.

But after the Huthi rebels seized power in Sanaa and violence worsened in Yemen, Obama in March withdrew all remaining U.S. troops from a base in the country's south.

The U.S. still has drones and other aircraft at bases in Saudi Arabia and Djibouti.