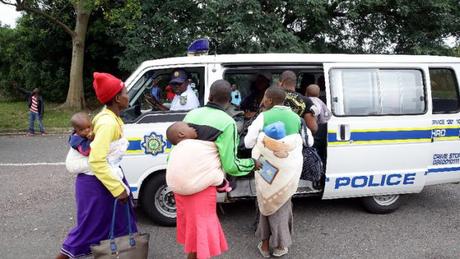 The United Nations on Friday expressed concern at the latest round of xenophobic attacks in South Africa, saying the violence had displaced 5,000 people.

At least six people have been killed with the unrest spreading from the eastern port city of Durban to the country's financial hub Johannesburg.

"In South Africa, xenophobic attacks over the last three weeks have... displaced over 5,000 foreign nationals, including refugees and asylum seekers," the U.N. High Commissioner for Refugees said, adding it was "extremely concerned".

"We would like to underscore that those affected in these xenophobic attacks are refugees and asylum seekers who were forced to leave their countries due to war and persecution," it said.

"They are in South Africa because they need protection."

In the past two weeks, shops and homes owned by Somalis, Ethiopians, Malawians and other immigrants in Durban and surrounding townships have been targeted, forcing families to flee to camps protected by armed guards.

Foreign-owned shops in the Jeppestown area of central Johannesburg have also been attacked.

Locals and African immigrants in South Africa often compete for scarce jobs, making them a target for violence and intimidation.

Anti-foreigner attacks have happened off and on for the past decade in South Africa.

In 2008, 62 people were killed in xenophobic violence in Johannesburg townships.