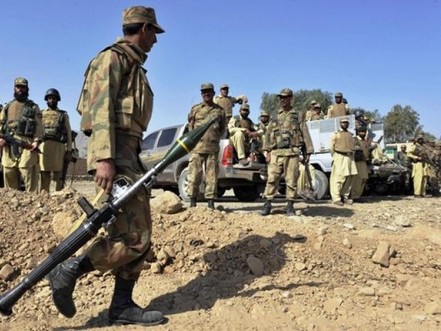 Pakistani security forces have seized a vehicle packed with more than a ton of explosives in the country's restive southwestern province of Baluchistan, officials said Friday.

Government paramilitary troops recovered the vehicle along with a cache of ammunition and four suicide vests during a raid on a refugee camp close to the border with Afghanistan, officials said.

He said two people had been arrested and taken to an undisclosed location for questioning.

"I cannot say which group the two men belong to but we had an intelligence tip-off that an explosive laden vehicle is about to be delivered in Quetta," he said.

Quetta, the capital of Baluchistan, was the scene of two of the deadliest bombings in Pakistan in recent years, in early 2013, when blasts a month apart targeting minority Shiite Muslims killed nearly 200 people.

Resource-rich Baluchistan is the largest of Pakistan's four provinces, but it in addition to sectarian violence it also struggles with Islamist militancy and a separatist insurgency.