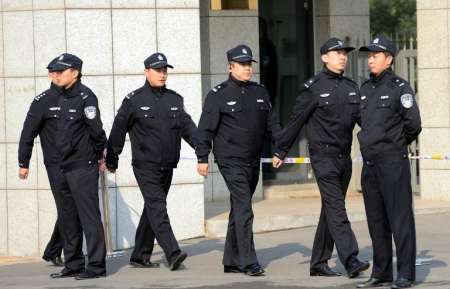 The shootings took place when police were attempting to make arrests, China National Radio (CNR) reported, citing sources from "several departments" it did not identify.

An unspecified number of "suspected terrorist elements" were discovered in Dongxing city in the Guangxi Autonomous region, the report said.

Two eluded capture and were pursued by police and border guards before being shot after a "fierce fight", the report added.

Total casualties had yet to be confirmed, it said.

The reported violence comes after state media said in January that police in Guangxi shot dead two members of China's Uighur ethnic minority trying to cross the border into Vietnam.

Uighurs are a Turkic-language speaking and mostly Muslim ethnic group native to China's far western Xinjiang region, which has seen intensifying and increasingly sophisticated attacks that have also spilled over into other parts of the country.

At least 200 people were killed in a series of clashes last year linked to Xinjiang, with authorities blaming religious extremists and separatists in the region.

Rights groups argue that harsh police treatment of the Uighur minority, as well as government campaigns and bans against religious practices such as the wearing of veils have led to violence.

The CNR report did not say if those shot dead on Friday were Uighurs.

But Dilxat Raxit, spokesman for the Munich-based World Uyghur Congress, which advocates for Uighurs, suggested that they were.

"More and more Uighurs are paying with their lives in the hope of stealing across the border to break free of their fearful existence in China," he said in an email reacting to the report.

Hundreds of people believed to be Uighurs were detained in Thailand last year, claiming they were Turkish citizens in order to avoid being sent back to China.

China has responded to Xinjiang-related violence with a severe crackdown, including executions and death sentences.

It executed three people in March for a mass stabbing in the southern Chinese city of Kunming that killed 31 people last year.

The bloodshed saw more than 140 people wounded and was dubbed "China's 9/11" by state-run media.

China blamed it on "separatists" from Xinjiang.