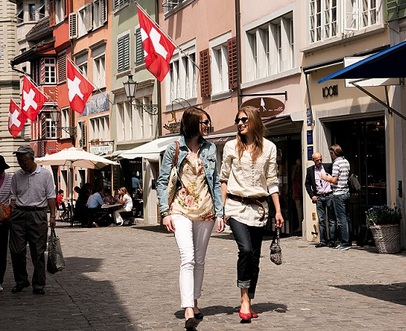 Switzerland tops a global ranking of happiness, closely followed by Iceland, Denmark, Norway and Canada in a comprehensive study unveiled by academics in New York on Thursday.

The 2015 World Happiness Report is the third annual report that seeks to quantify and explain happiness in 158 countries as a means of influencing government policy across the planet.

Finland, the Netherlands, Sweden, New Zealand and Australia round out the top 10, meaning that small or medium-sized countries in Western Europe occupy seven of the top 10 slots.

The United States trails in 15th place, behind Israel and Mexico, and Britain at 21, pipped by Belgium and the United Arab Emirates. France ranks number 29, behind Germany in 26th place.

The key variables are real GDP per capita, healthy life expectancy, having someone to count on, perceived freedom to make life choices, freedom from corruption and generosity, the study said.

Despite the conflict raging in Iraq, that country was ranked 112, ahead of South Africa, India, Kenya and Bulgaria.

"This report gives evidence on how to achieve societal well-being," said Jeffrey Sachs, director of the Earth Institute at Columbia University in New York.

"It's not by money alone, but also by fairness, honesty, trust and good health," he added.

Sachs, John Helliwell of the University of British Columbia and Richard Layard from the London School of Economics edited the 166-page report.

Helliwell said a "science of happiness" was getting to grips with what defines quality of life.

"Countries with strong social and institutional capital not only support greater well-being, but are more resilient to social and economic crises," he said.

A positive outlook during childhood also lays the foundation for greater happiness during adulthood, Layard said.

"We must invest early on in the lives of our children so that they grow to become independent, productive and happy adults, contributing both socially and economically," he added.

The United Nations published the first happiness index in 2012.