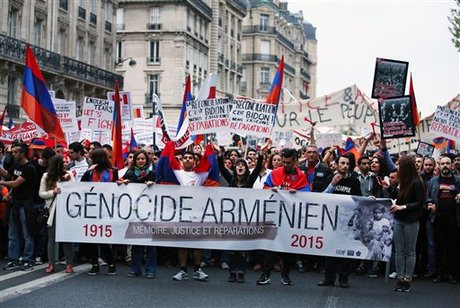 Turkish President Recep Tayyip Erdogan on Saturday lashed out at the European Union and world leaders who have recognized the 1915 massacres of Armenians as genocide on the centenary of the events.

Erdogan accused the leaders of France, Germany and Russia of "supporting claims based on Armenian lies" after they described the slaughter of an estimated 1.5 million Armenians by Ottoman forces as genocide -- which Turkey strongly objects to.

During commemoration ceremonies in Armenia on Friday, French President Francois Hollande urged modern-day Turkey to recognize the massacre as genocide while Russian President Vladimir Putin too used the controversial label though only once.

The statements were immediately condemned by the Turkish foreign ministry, which also lashed out against the "unfounded accusations" of German President Joachim Gauck, who qualified the mass killings as genocide a day before the centenary.

"We would have wished that Putin had not gone to Armenia, nor Mr. Hollande" Erdogan told a meeting of businessmen in Istanbul in comments broadcast by Turkish television.

"The last countries to speak of genocide are Germany, Russia and France. What happened during the two world wars that had been initiated by Germany in the past century is before our eyes," he said.

"They should first, one-by-one, clean the stains on their own histories," he said.

Erdogan went on to accuse the EU -- whose parliament voted to call the events a genocide on April 15 -- of "not telling the truth" and said: "Hey European Union! Don't offer us any thoughts, keep them to yourself."

"Have no concern, should there be a situation where the incidents of the past were accounted for today, Turkey would be the most comfortable on this aspect."

The Turkish leader also accused the United States of siding with Armenia and of "hatred", though President Barack Obama sidestepped the contentious term by using the Armenian term Medz Yeghern, meaning great catastrophe.

Turkey says it shares the pain of Armenians over the events but has vehemently rejected the use of the term genocide, contending that hundreds of thousands of Muslims and Christians were killed on both sides in a wartime tragedy.

Earlier this month, Pope Francis drew Turkey's wrath after describing the killings as "the first genocide of the 20th century."

Turkey summoned the Vatican ambassador in Ankara over the remarks and recalled the Turkish envoy to the Holy See.

On Wednesday, Turkey recalled its ambassador to Austria in protest over Austrian lawmakers' condemnation of mass killings as "genocide."

More than 20 nations, including France and Russia, have recognized the Armenian genocide.

the pro head chopping pig is "lashing" out at a lot of powerful folks.

hopefully someone steps on the ant like the midget he really is.

Sultan Erdogan uses the same language like his Salateen ancestors

And here I thought that Turkey has been trying to join the EU for the last 20+ years.
That statement by their evil President, sahould be the final nail in the coffin of their efforts.

Turkey will not be admitted into the EU whether or not they acknowledge this terrible crime. It should however do it to heal wounds and acknowledge misdeeds.

One however should not forget that Muslims were also massacred by Armenian and Russian troops and that Russia and its allies committed genocide and ethnic cleansing against several Muslim-majority ethnic groups (estimated that they killed an excess of 1.5 million muslim civilians and driven millions more into What is now Turkey.

The massacres against Armenians are well documented even by Turkish official - some of whom courageously opposed. The irony is that while people keep referring to the massacres as being done by the Sultanate, it was the nationalist army officers - who usurped the power of the Sultan - who committed his heinus crime.

The past few weeks were like hell to him. He can't wait while this whole thing is over. At least for now :)